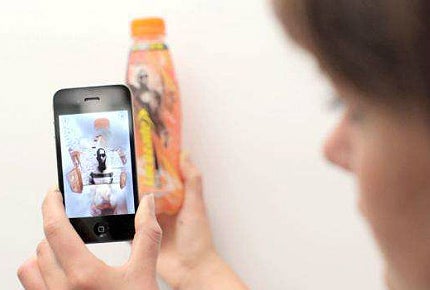 With the advent of smartphones placing a highly powerful device in the palms of the majority of the population, product packaging could be on the cusp of a digital revolution. Augmented reality and its ability to place an entirely interactive digital overlay when viewed through a mobile device could almost literally cause a product’s packaging to spring to life.

Despite its premise, doubts over the technology’s adoption and potential popularity remain. QR codes, borne from the same notion but a distinctly different technology, have been met with a mixed response by consumers and the concern is that not only could augmented reality be considered a mere gimmick, but that its reliance on people using mobile devices to view it could pose a significant detraction.

The technology itself takes its inspiration from virtual reality and harks back to technology pioneered by Boeing in the realm of aircraft design. Its premise is a fairly simple one; with a marker being designed into the product’s manufacturing that is picked up and identified through the camera attachment and applications of mobile devices, such as smartphones or tablet computers.

Analysis
Why ‘big laundry’ has an even bigger problem with plastic

Analysis
Industrial automation hiring levels in the packaging industry dropped in August 2022
Data Insights
View All
“The technology itself takes its inspiration from virtual reality and harks back to technology pioneered by Boeing.”

Faraday Centre for Retail Excellence commercial manager Andrew Revel reveals: “Augmented reality shouldn’t be confused with QR codes, as they’re two totally different technologies. It requires a visual marker that activates a digital animation to be overlaid. It enables you to look at the world through a device and put a digital overlay that enriches the environment and provides information.”

Whereas the idea may have been around for a number years, it simply wasn’t feasible until technology caught up with imagination. “Generating 3D graphics in real-time requires fast processors,” explains Revel. “The latest generation phones are so incredibly fast and powerful that they’re perfectly at home crunching the amount of data that’s required.”

On the shelves and in the pipeline

Augmented reality is already becoming common place on supermarket shelves, with a number of product lines utilising the technology as part of promotional campaigns. Sport drink Lucozade used augmented reality as part of its YES List campaign, wherein consumers could use the Aurasma app to open exclusive performances from musical artists.

“Whereas the idea may have been around for a number years, it simply wasn’t feasible until technology caught up.”

Another ultimately more popular campaign was launched by furniture retailer IKEA, which used augmented reality as part of the smart phone version of its catalogue.

3D versions of the company’s furniture came loaded within the app, allowing users to see what the furniture would look like in their homes and whether or not it would fit into specific places. The free app, available through Apple’s iTunes store, has been warmly received and heralded by consumers.

Perhaps gauging the public’s move towards a greater acceptance of using smartphones in such a way, IBM is currently developing its augmented shopping assistant, which would allow a consumer to point their mobile device at a shop display and identify the products, displaying information relating to them. “The UK could be the first country to see the technology deployed, and it could actually change the way consumers shop,” adds Revel.

The system works by identifying the product using a marker designed in the packaging, which brings forward information relating to that product from a cloud database. Users could then tap the product on their screen to display more precise data, such as nutritional information and pricing. Information such as this is now dictating product packaging, as companies struggle to place what they are legally required to alongside packaging designed to attract consumers.

“With EU regulation, the amount of statutory information that has to be displayed on packaging is only increasing. Promotion could end up being just a secondary role for augmented reality, with its primary use to display information that wouldn’t ordinarily fit on the box,” Revel said.

“Users could then tap the product on their screen to display more precise data, such as nutritional information and pricing.”

Augmented reality has undoubted potential in the fields of product packaging, but it remains to be seen whether or not consumers will openly embrace a method that involves the constant use of a mobile device while shopping. The laborious task of scanning a product’s packaging, loading the digital layer onto a mobile device and then interacting with it could prove to be a step too far for consumers.

“The idea may seem alien to some, but an entire generation already live through their mobile devices,” says Revel. The UK currently boasts one of the highest saturations of smartphone devices in Europe, with people using them to remain constantly connected to social networks. Would using them to shop, however, prove a step too far? Recent studies involving pop-up shops in which customers used smartphones to scan images of groceries they wished to purchase and have them delivered to their home address seemed to indicate a willingness to shop in such a fashion.

If augmented reality really is to be adopted with such consumer support, then shopping in tomorrow’s supermarket could be a thoroughly interactive experience. Detailed product information and price comparisons fed through to mobile devices at the touch of a button, with advertising campaigns incorporated into store displays. Seasonal promotions could become fully immersive, with Easter rabbits leading children to the location of chocolate eggs within the store.

Google’s Glass device, a pair of spectacles that acts as a head-mounted display allowing the user to display information directly in their line of sight, could only further this experience, while the development of contact lenses capable of similar abilities is also in the pipeline.

So, far from being a mere promotional gimmick, could augmented reality become commonplace in product packaging? Revel states: “It enables you to make the bridge between the physical and digital world. This is a technology that will evolve and add value to consumer experience.”

Brands are refreshing their designs more than ever before, but in today’s market very few actually pull it off.