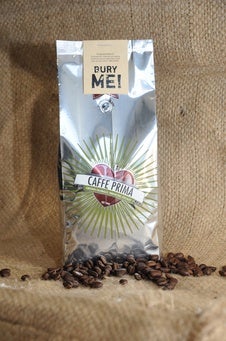 Caffe Prima, based in Christchurch, has chosen to use Econic coffee bags. The bags were specifically developed by New Zealand converter, Convex Plastics, using NatureFlex renewable and compostable films in their construction.

"Coffee is a very demanding product to package because maintaining freshness and taste is absolutely paramount. Packs have to be puncture and impact resistant and offer high barrier and good seal integrity to keep oxygen out and aroma in. Coupled with this, Caffe Prima was looking for a solution that was kind to the environment. NatureFlex ticked all the boxes as far as we were concerned," said Andrew Sheerin, technical manager at Convex Plastics.

"Achieving success with partners such as Convex means that our NatureFlex films are well positioned to provide solutions to converters and brand owners. Especially those seeking to meet consumer demand for packaging made from renewable resources," said Robin Dearnley, Australia and New Zealand sales manager for Innovia Films.

NatureFlex films are certified to meet the American ASTM D6400, European EN13432 and Australian AS4736 standards for compostable packaging. The wood pulp is sourced from managed plantations from referenced suppliers operating good Forestry principles (FSC or equivalent). The renewable biobased content of NatureFlex films is typically 95% by weight of material according to ASTM D6866. NatureFlex has been confirmed as suitable for emerging ‘waste-to-energy’ techniques such as anaerobic digestion, aiding the diversion of organic wastes from landfill.

NatureFlex was an obvious solution for use in this application as the film begins life as a natural product – wood – and breaks down at the end of its lifecycle in a home compost bin (or industrial compost environment) within a matter of weeks.