Kirkland & Ellis was the leading legal adviser globally for mergers and acquisitions (M&A) in the first quarter (Q1) of 2020 in the consumer sector, according to GlobalData.

The US law firm advised on five deals worth a combined $6.67bn.

It was in the fifth place in GlobalData’s Q1 2020 ranking of top 20 financial advisers for global M&A.

GlobalData has published a top ten league table of financial advisers ranked according to the value of announced M&A deals globally. If the value remains the same for multiple advisers, deal volume is given weight. 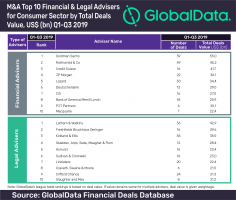 GlobalData financial deals analyst Aurojyoti Bose said: “Advising on big-ticket deals helped Kirkland & Ellis occupy the top spot, despite advising on fewer deals compared to other firms. It stood at sixth position in terms of volume. Only three out of the top 10 advisers by value also ranked in the list of top 10 advisers by volume.”

Latham & Watkins has secured the top spot in the latest global M&A financial advisers league table based on deal volume in Q1 2020, having advised on nine deals worth $1.6bn.