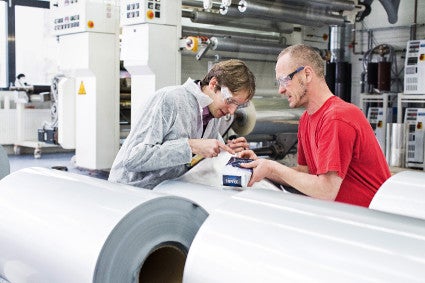 Germany-based Henkel is set to introduce a new range of adhesives and coatings for the flexible packaging industry.

The company's new solvent-free laminating adhesives from the Liofol LA 7777 family are said to be appropriate for high barrier films that demand low CO2 formation from the adhesive.

According to the company, a laminated structure containing an OPA film used for cheese packaging requires more time for full cure and decay of amines compared to an OPP/OPP structure for snack food packaging.

In such cases, primary aromatic amines are already below the detection limit after one day.

With the Liofol LA 7777 series, converters have the allowance to cut down the time to compliance with food regulations.

The adhesive systems have also been given a long potlife of up to 60 minutes, which is claimed to be double the time of reference systems.

Henkel marketing manager Regina Müller, commenting on the new product, said, "The LA 7777 series is a great new option for the converting industry to provide even safer food packaging."

The company has also developed a new water-based heat seal lacquer for food applications, Liofol HS 2210-22, which activates at less than 100°C.

Available for a range of applications including banderoles, soap packs and coffee packs, the lacquer can be applied on film, foil and paper.

The product allows users to incorporate heat seal technology into their converted products without any investment in hotmelt application technology.

Henkel will introduce its new products at the International Converting Exhibition 2013 in Munich, Germany, taking place from 19 to 21 March.