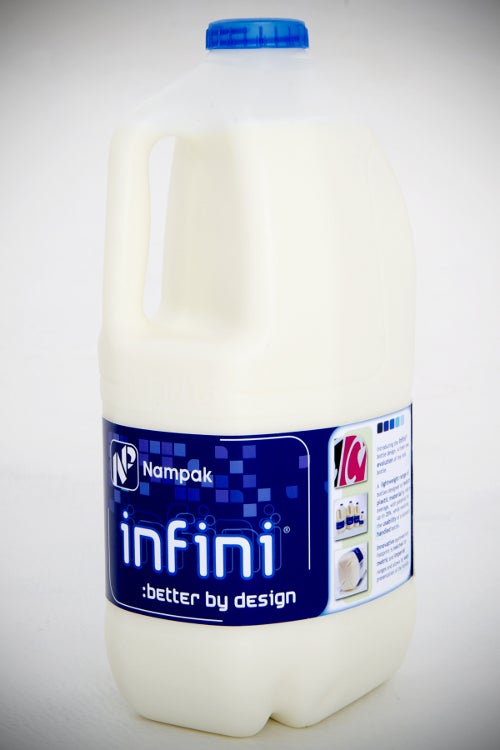 The new bottle, which is undergoing trials at present with a number of the company’s customers, weighs in at just 32g, and represents a 20% material saving on the standard four-pint version which weighs 40g.

Namapk’s Infini bottle, which will be stocked in many retailers including Marks & Spencer, Morrisons and Sainsbury’s, is said to be the lightest bottle in its segment on the market.

According to Nampak’s assessments, a shift towards the 32g bottle is expected to ring in considerable environmental improvements for the milk sector.

According to the company, 15,000t of resin would be saved annually if its entire annual output of two billion bottles is moved to the new lighter Infini.

The Infini could cut down the overall amount of resin used in the UK milk packaging by 30,000t, which represents a saving of 25%.

Nampak Plastics managing director Eric Collins said Infini has been responsible for a paradigm shift in milk packaging, using less material and more recycled plastic, since its launch in 2012.

"Feedback on Infini from milk processors and retailers has been extremely positive – and we know from extensive research that consumers also prefer the design to the standard bottle," Collins said.

The new green bottle has HDPE lightweight savings of 20% on the industry’s current bottle, is affordable, and will perform well in all aspects of the dairy supply chain.