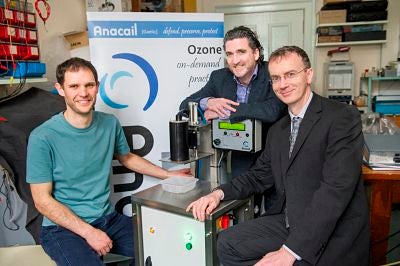 Scientists at the University of Glasgow have developed a novel method to make packaged food safer for consumers and extend its shelf life, by exploiting ozone’s germ-killing power.

A new system has been prototyped by Dr Declan Diver and Dr Hugh Potts of the University’s School of Physics and Astronomy to briskly, safely and temporarily turn some of the oxygen inside the sealed packaging into an effective germicide – ozone.

According to the scientists, plasma generated by a retractable device held against the surface of plastic or glass packaging divides the bonds between oxygen molecules inside the packaging, which then transform into ozone.

After a couple of hours the ozone reverts naturally to its original state, during which mould, fungi or bacteria on the contents of the packaging will be destroyed without changing the taste.

The effectiveness of ozone as a germ-killer also extends shelf-life by at least one extra day, which could significantly reduce the seven million tonnes of food discarded in the UK annually.

University spinout company Anacail will bring the product to market.

Anacail chief executive officer Dr Ian Muirhead said the product is safe and easy to use, and no change is required in existing food products packaging and any chemical additives.

"Although ozone can be harmful to humans, it has a very limited lifespan before it returns to oxygen and it doesn’t leave behind any dangerous residues so it’s perfectly safe to use in food decontamination," Muirhead said.

Ozone is said to be an effective way to destroy or inhibit the growth of bacteria and viruses.

An increase in shelf-life for products including bread and muffins was shown by various tests , besides a considerable reduction of many pathogens in poultry including campylobacter, pseudomonas, and E.coli.