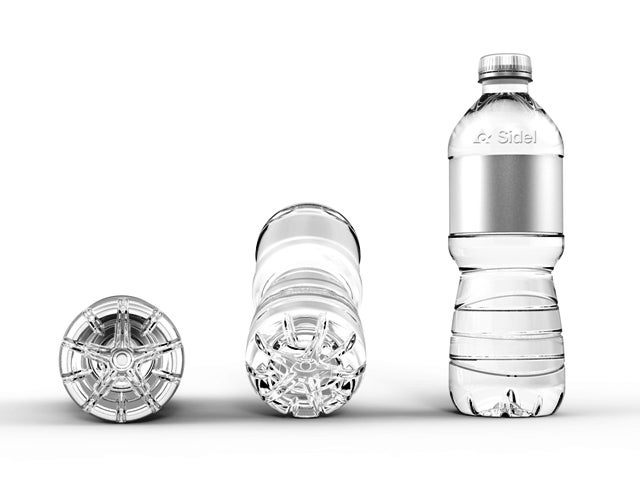 Sidel has developed a new PET bottle base for still drinks that increases stability and bottle rigidness and lowers the weight of the package.

The new StarLite bottle base is suited for water and juices in particular, and can also be used for other still beverages.

Groove structure edge beam improves base stiffness, and the smart disc structure reinforces the base to avoid deformation.

The base can be retrofitted into existing bottle designs and shapes. It can also be applied to existing production lines using the company’s accompanying StarLite mould bases.

Tests have revealed that when the bottle is on a pallet, the StarLite design resulted in up to a 30% increase in top-load dent resistance, and up to a 55% rise in side-load resistance.

The bottle also lasted up to 25 days without bottle deformation in 50°C conditions, and under frozen conditions it recorded up to a 50% decrease in base rollout.

The base uses up to 1g less PET for a 0.5l bottle or 2g with the 1.5l format. It is also compatible with nitrogen drop technology, offering the possibility that it could still be made even lighter.

18 Jan 2021
Registration is disabled.
We use cookies to ensure that we give you the best experience on our website. If you continue to use this site we will assume that you are happy with it.ContinueLearn more