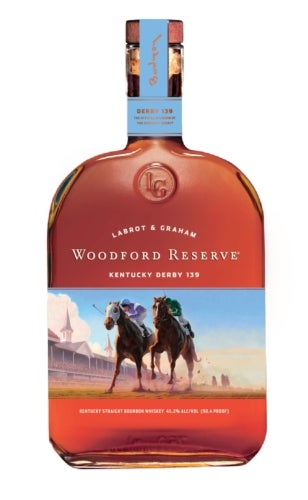 Woodford Reserve, the 'Official Bourbon of the Kentucky Derby', has announced the launch of its 2013 Kentucky Derby commemorative bottle.

The limited-edition bottle, which is a product of the Woodford Reserve Distillery in Versailles, Kentucky, US, features the artwork of Oregon-based painter Eric Bowman.

The painter's picture on the bottle shows a crisp, sunny Kentucky Derby day, featuring blue skies over the Twin Spires.

The bottle has a close-up image of two horses that are shown racing neck and neck down the track in front of the spires, fighting towards the finish line, as they kick up dirt.

Two jockeys in colourful silks are saddled on the horses, racing them towards the prize, and in the distant background a shadow of three horses is shown, which are trying to catch up to the leaders.

Featured in the same sky blue colour is a neck band that displays the signature of the artist and seals the top of the bottle.

An attached tag bearing information about the product and the artist hangs around the bottle.

"This philosophy made him the perfect selection as the Kentucky Derby 139 bottle artist," Petry said.

The 1l bottle will be available in 46 markets across the US.