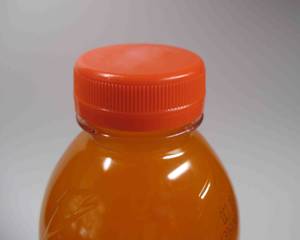 The linerless one-piece closures include an integrated DoubleSeal-system, and provide a higher seal and release angle. The package loses integrity only after a 160° turn of the closure, whereas a package closed with a two-pieces closure will lose its integrity after a very small opening angle.

"In hot fill applications, the bottle neck is softened by the heat from the product itself. Consequently, the side and down-pressure from applying the closure puts considerable stress on the bottle finish. This can cause it to distort or ovalise, which can lead to leaking and product contamination," Spiesmacher added.

Featured with the DoubleSeal system, the closure has an outer and inner seal securing the filled product, and the design suits hot fill applications as it supports the finish.

Compared to the traditional two-piece method, during the sealing process DoubleSeal caps are fitted with lateral, opposing force pressure from both outside and inside to support the neck, instead of down pressure.

As a result, the neck walls of the hotfill bottle can be lighter and use less materials, providing weight and cost savings.