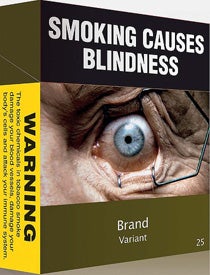 BHF is calling on the government to introduce standardised packs in the UK after the survey suggested they are more likely to put teenagers off smoking compared to existing front-of-pack health warnings.

The survey of 2,500 13 to 18-year-olds in the UK and Australia found that nearly eight out of ten (77%) British teenagers believe that standardised cigarette packs should be introduced in the UK.

The BHF survey also said the packs make people of that age less likely to smoke, and supports standardised packs such as those used in Australia.

Two thirds (66%) of Australian teens think that the packs should also be introduced in other parts of world.

Further, the survey noted that ten percent of teenagers in the UK assume that certain cigarette brands are healthier compared to others, which is twice as many as Australian teens (five percent).

"BHF is calling on the government to introduce standardised packs in the UK."

BHF chief executive Simon Gillespie said the UK must act to protect future generations from the habit of smoking which kills 100,000 people in the country every year.

"The message from our young people is loud and clear: current health warnings aren’t up to the job and the UK Government must step up to the mark and introduce standardised packs," Gillespie added.

"The evidence shows that standardised packs increase the effectiveness of health warnings and lessen the appeal of cigarettes, particularly among young people, so it’s imperative MEPs vote for larger health warnings and then peers agree to amend the Children and Families Bill."