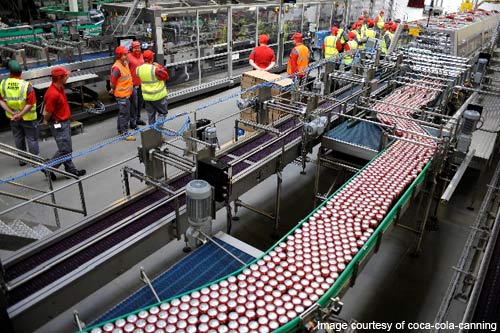 Coca-Cola (CCE) and Siemens Industry Automation (Siemens) have initiated a new standardisation of automation and controls process, as part of a partnership agreement signed between the two companies.

The approach is based on a standardisation to aid CCE’s drive to step-up the production capacity of its bottling and canning lines, and reduce maintenance levels across its production sites.

The company also aims to optimise spare part stock and lay the foundations to futureproof investment in its production facilities.

Both Siemens and CCE are working to implement the strategy across Europe, as per the agreement.

Uncategorised
What smart labels can do for food waste reduction

CCE has implemented Siemens automation control technology as part of the commissioning of a new £14.3m production line at its Sidcup factory in Kent, UK, which is running for both canned products.

With a capacity of 120,000 cans per hour, the new KHS canning line is set to increase capacity at the Sidcup plant annually by another 20 million cases.

The company has also planned to implement Siemens standardisation strategy optimised packaging line (OPL) at its Kent plant, in a bid to increase line efficiency and reduce training costs.

The new KHS line is expected to initially produce 150ml and 330ml cans with further plans to introduce 500ml cans.

With the new standardisation programme, CCE is ready to make the most of the advantages of the Siemens OPL agreement across its system.

The company plans to bolster production levels at its Sidcup factory to cater to the requirements of a major sporting event coming up in the UK.