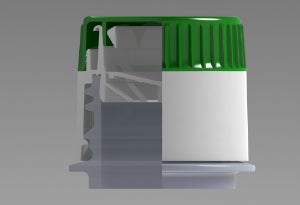 Until 2010, large areas of the edible oil industry used PET bottles with the standard 29/21 bottleneck. This neck size was developed at a time when plastic closures had to fit both glass bottles and PET-bottles.

Based on its longstanding experience with closures for bottling, BERICAP sped up the development of lightweight closures, particularly in connection with a bottleneck reduced in weight, and developed a series of edible oil closures in one-piece and two-piece versions with differing equipment features for bottleneck diameters of 26mm.

In 2010, a well-known, international edible oil producer converted its 29/21 neck to the 26/21 neck and since then has saved significant amounts of resin and costs.

Also, some companies producing different product categories, such as beverages and food edible oil, would look for opportunities to rationalise their bottle portfolio and bundle their pre-form purchase power by concentrating on one neck size. Last but not least special lightweight necks, such as 26/21 or 29/21, may simply not be available locally and would need to be imported.

For all such cases it is an advantage to use pre-forms, which are available from multiple suppliers at competitive prices and which are available locally. Thus, the PCO 1881 neck offers such an opportunity. It is a lightweight neck weighing 3,82g only, which meanwhile is available in many countries around the world. Supporting companies working in different product categories or edible oil bottlers preferring a widely available bottle neck, BERICAP has developed the EV 28/26, a press-on closure suiting the lightweight bottle neck PCO 1881.

The EV 28/26 snap-on closure is equipped with a screw closure to open the bottle and the content is protected with a membrane as a tamper evidence feature. As a standard feature the screw cap is designed with special drip-less function, to avoid spillage of the closure and bottle after pouring, and can be supplied with or without a flow regulator.

Typically the EV 28/26 can be used, besides edible oil, for products such as sauces, dressing, syrups, etc. Other closures for standardised necks are in the trial phase.