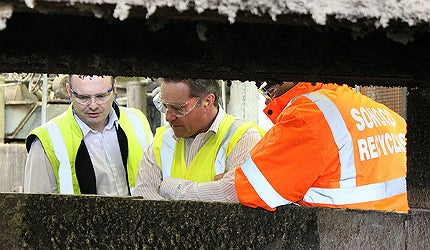 ACE UK, in partnership with Sonoco Alcore, announced it was to set up a recycling facility for beverage cartons in the UK, in 2012.

The recycling plant is the first such facility in the country. It is located near an existing paper mill of Sonoco Alcore in Stainland near Halifax, West Yorkshire.

The plant reprocesses the cartons collected from the household and commercial wastes gathered by the local waste management contractors and relevant authorities.

It is opened in September 2013. The reprocessing capacity of the facility is 25,000t per annum.

Packaging companies involved with the facility

"Sonoco Alcore has partnered with ACE UK in order to benefit from the supply of wood fibres."

The Alliance for Beverage Cartons and the Environment, popularly known as ACE UK, is an association of packaging companies Tetra Pak, SIG Combibloc and Elopak.

It aims to reduce the environmental impact of their beverage cartons. Sonoco Alcore is engaged in the manufacturing of paper and packaging products.

Sonoco Alcore has partnered with ACE UK in order to benefit from the supply of wood fibres to boost its sustainable paper production practices.

The ten-year partnership agreement between Sonoco Alcore and ACE UK was signed in 2012.

The plant offers environmental benefits by helping to bring down emissions. ACE UK is currently recycling the beverage cartons collected in the UK in its mills located in Spain and other countries in mainland Europe.

This requires the export of the waste cartons by rail and road. The new plant avoids 288t of carbon dioxide emissions per annum by saving the road and rail miles that the cartons need to be transported. It also reduces the greenhouse gas emissions from landfill sites.

Benefits of the Yorkshire-based recycling plant

Material used in producing beverage cartons contains wood fibres that can be used in paper production. The fibres are normally very strong and flexible. They can be recycled for reuse as raw materials in paperboard production.

The carton reprocessing facility is located close to the paper mill of Sonoco Alcore so that the fibres can be supplied directly to the mill.

The company recycles the fibres into coreboard which can be used in consumer and industrial products, such as yarns and clings.

The recycling plant also eases the job of local waste management authorities in diverting the waste to be recycled. The authorities no longer need to sell the waste cartons to overseas plants.

The local waste management authorities in the UK collect the beverage cartons in kerbside services, which ACE UK collects and sends to the reprocessing facility. ACE UK currently collects the cartons from what is known as ‘bring-bank system’ which represents the local sites for wastes.

"The Alliance for Beverage Cartons and the Environment, popularly known as ACE UK, is an association of packaging companies."

Cartons from these bring-banks were sent to Spain for recycling but now they are reprocessed at Sonoco Alcore’s mill.

ACE UK has entered into agreements with a few local authorities for the kerbside collection of beverage cartons and expects to add at least ten more authorities to the list by the end of 2013.

The process involves dropping of the cartons into the pulping machine containing water. The machine pulps the material for 20 minutes to remove the laminates from the cartons and form a slurry material.

The slurry is treated to separate the aluminium foil and polyethylene from the fibres. The resulting fibre can be used for cardboard production.

The new reprocessing facility at Stainland can recycle cartons used for a number of beverage types, such as sauces, soups, milk and fruit juices.