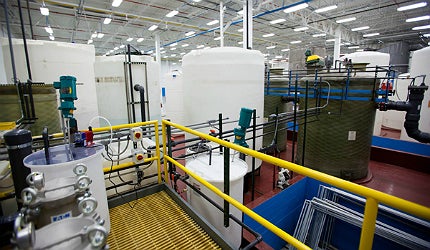 Anodised aluminium manufacturer Anomatic opened a new plant in New Albany in the state of Ohio in the US, in February 2012. Anomatic is considered as a market leader in metal packaging and custom anodising processes.

"The new plant was built on a Greenfield site in the New Albany Business Park on the Personal Care and Beauty Campus."

It specialises in anodising, product designing, metal forming, decorating and assembling. The anodised, corrosion-resistant, aluminium packages are used in the pharmaceutical, medical, personal care, health and beauty and cosmetic industries across the globe.

The company already operates two plants in the US (Ohio and Connecticut) and one production plant in Suzhou, China. Anomatic also has a sales office in Paris. The company aims to tap the European decoration, metal parts, finishes and closures market in the future.

The New Albany plant was designed by Ohio-based JBA Architects. The plant received Leadership in Energy and Environmental Design (LEED) certification from the US Green Building Council in February 2012, for its sustainable design.

The plan to build the new facility was announced in March 2011. The expansion was necessitated due to the growing global market and for reduction in the time taken to get to market. Construction of the facility and installation of the equipment required an estimated investment of $8.7m. It is expected to employ about 185 people in the first three years of operation.

Anodising capacity at the Ohio-based facility

The new plant was built on a Greenfield site in the New Albany Business Park on the Personal Care and Beauty Campus. It is situated about 15m from the Anomatic headquarters office in Newark, Ohio.

The 65,000 square feet facility consists of two anodising lines. The anodising capacity of the company in 2011 was about 1.5 billion parts. The New Albany plant increases the capacity by another 250 million anodised units a year.

The plant incorporates the Anomatic System anodising process, patented in 1967. The proprietary conveyor belt process system enables each unit to have a consistent and uniform colour and finish while passing through the solution. The process also allows repeatable production due to high speed automation. The double-anodising technology has high volume output, with each machine producing about 500,000 units of anodised components a day.

The two new anodising lines are based on Anomatic’s proprietary anodising system with some upgrades. Design and building of the systems was completed at the Newark headquarters in less than six months.

The plant features several sustainable technologies in order to reduce its energy dependence, potable water usage through enhanced rinse technologies and a new water purification system for recapture and reuse. The plant saves up to 40% of the water used. A closed circuit solvent cleaning technology requires 92% less energy for its operation. It also recovers about 90% of the oil used during forming process.

Nitrogen oxide emissions are cut by 98% using air scrubbing technology. The company received $100,000 in funds from Columbia Gas for its sustainable efforts at the new plant. It also received tax credit and other incentives from Ohio and the city of New Albany.

Investments by the packaging and anodising company

Anomatic was established in 1965. In April 2011, the company invested about $1.2m to increase the transfer presses capacity at their Connecticut facility. The project involved installation of ten new metal stamping presses, the addition of a tool and die shop and other assembly equipment. The company now has about 60 high speed presses and 23 fully automated and semi-automated assembly machines across its global plants.

The Personal Care and Beauty Innovation Campus within the New Albany Business Park, where the new Anomatic plant is located, is a cluster of companies involved in the personal care and beauty industry.

Other companies to be located on the campus include Accel, the Knowlton Development Corporation, Axium Plastics, Vee Pak, Alene Candles and The Jeyes.

They largely benefit from the common supply chain contractors, complementary capabilities and creative synergies. It acts as an integrated vertical supply chain hub to support the manufacturers and to distribute their products. The campus generated about 1,000 jobs in 2010.