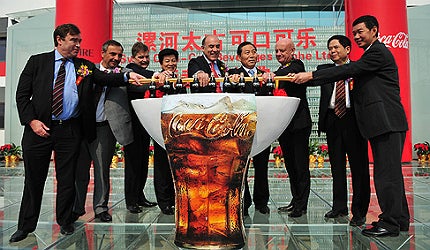 The new Coca-Cola bottling plant in the city of Luohe in Henan province was opened in October 2010. It is the company’s second largest production facility in China. The plant produces beverages such as Coca-Cola, Sprite, Fanta and Minute Maid.

The plant is being built in three phases. The estimated investment for the first phase of the plant was RMB900m ($132m). Construction for the second phase started in September 2011. The company is investing about RMB400m ($62m) in the second phase. It is expected to be completed by the end of 2012.

The project is reported to have created more than 1,000 direct and 10,000 indirect job opportunities in the local area.

The Luohe bottling plant is the company’s 41st production facility in China. It was built as part of its $2bn three-year accelerated investment plan in the country announced in 2009. The investment also included the opening of a $90m innovation and research centre in Shanghai in March 2009.

The development was carried out in coordination with the government’s plan to develop central and western China, according to Coca-Cola. The company has also announced its plans to further invest $4bn in China between 2012 and 2014.

The Luohe facility occupies more than 320 acres and has total built-up area of 67,000 square metres. It was awarded the US Green Building Council’s Platinum Leadership in Energy and Environment (LEED) certificate in November 2012.

"The Luohe bottling plant is the company’s 41st production facility in China."

The building features energy and water conservation facilities, such as solar energy and wind powered street lamps and rain water recycling for use in the toilets. It houses a water treatment plant as well, to save source water. The plant also features a ground source heat system which provides renewable heating throughout the year.

The plant will have seven production lines in total that will be completed in three phases. It will have a capacity for producing more than 100 million 20ft equivalent units (TEU) a year. The second phase will involve a total construction area of about 30,000 square metres of production area.

It will include two sterile production lines as well as one for mineral water and a warehouse. Once phase two is complete, the plant will have a capacity to produce 50 million standard containers a year.

A bottle manufacturing site is selected only after the source water is tested for all requirements of potable water. These tests and analysis are conducted by an independent accredited lab.

The water is brought to the plants through sealed pipelines and stored in tanks which are placed in secured water treatment areas of the plants.

Coca-Cola beverage products are made up of syrup prepared from double refined sugar, purified water, carbonated soda and concentrate.

Purified water is mixed with double refined sugar to create sugar syrup. Coca-Cola concentrate is added to the sugar syrup and then carbonated to create the fizz.

The empty bottles returned from the market are first washed and rinsed with clean, filtered and purified water.

"The plant produces beverages such as Coca-Cola, Sprite, Fanta and Minute Maid."

The bottles are then soaked in a high temperature liquid to remove remaining dust particles. They are then sanitised using deep cleaning pressure spray. This process is called hydro wash.

Sanitised bottles are electronically checked and mechanically visualised by technicians. The tested bottles are loaded on to the automatic conveyors for filling. The conveyors allow exact filling and automatic sealing of each bottle to provide complete hygiene.

The bottles are labelled and data coded specifying the day, month, shift and plant in which the beverage is produced, before being packed in cartons for distribution to the market.

Coca-Cola’s influence on the Chinese market

Coca-Cola built its first plant in China in the decade following the First World War. It has ownership stakes in most of its plants through two Hong Kong-based joint ventures – Swire Beverages and Kerry Group. As of September 2012, the company has 42 manufacturing plants.

Along with the Luohe plant, two other facilities, the Sanshui plant in Guangdong province and the Hohhot Plant in Inner Mongolia, were also opened in 2010. In March 2012, a new bottling plant was opened in Yingkou in the north-eastern Liaoning province. The Yingkou plant is stated to be the largest bottling plant of Coca-Cola in China.

After the United States and Mexico, China is the third largest market for Coca-Cola. In 2011, Coca-Cola registered a 13% increase in its sales volume in China which forms eight percent of its global sales volume.

In March 2010, Coca-Cola announced the construction of a new bottling plant in Malaysia.