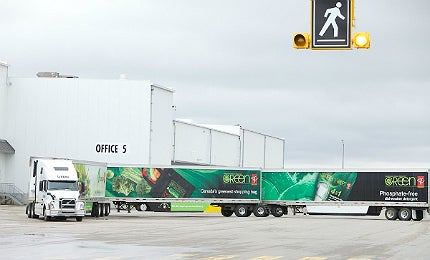 Emterra Environmental, part of the Emterra Group, built a new materials recycling facility (MRF) in the city of Regina in Saskatchewan, Canada. The $18m plant has a processing capacity of 50,000t a year (t/y). It was opened in July 2013.

The plant, which is Emterra’s first in the region, diverts 40% of waste collected from the city’s landfill. It created 75 jobs during construction, and 30 permanent jobs. The number of permanent jobs is expected to increase in the event of future expansions.

Emterra hired local contractors and construction companies for the project, thereby contributing to the local economy.

"The plant diverts 40% of waste collected from the city’s landfill. It is Emterra’s first facility in the region."

The plant was built as part of a curbside recycling programme being implemented by the city of Regina. Emterra was awarded a ten-year contract by the city under this scheme.

Residents and businesses in Regina are provided with two bins under the programme. One bin is for garbage waste, the other for recycling. Loraas Recycling is responsible for collecting the materials for recycling and delivering to Emterra’s facility.

The recycling programme collects approximately 25,000t of materials from 63,500 households and businesses in Regina.

Emterra’s new plant is located on a 13-acre site in Global Transportation Hub (GTH), a major transportation and logistics centre in Regina. GTH provides access to all major ports and Trans-Canadian road networks. Emterra purchased the land in GTH in February 2013. The location provides Emterra with fast and cost-effective access to its US and global markets.

Design and construction of Emterra’s MRF

The new MRF is built over an area of 45,000ft². Emterra followed Leadership in Energy and Environmental Design (LEED) principles for the construction and operation of the plant. It used 1,000t of recycled material for the plant’s construction.

The company used 275t of recycled asphalt for carrying out the site works. It also used 150t of recycled steel in the construction of the plant.

The facility is also equipped with the latest environmentally friendly technologies that use less energy and water and fewer natural resources. It is fitted with energy-saving windows and doors, and water-conserving fixtures in the washrooms.

Equipment at the Canadian MRF

The Regina facility processes single stream recyclables, which enables residents and businesses to combine recyclables in the same recycling bin.

"The recycling programme collects approximately 25,000t of materials from around 63,500 households and businesses in Regina."

This process helps in recovering between 20% and 25% more recyclable materials, compared with other recycling programmes in which residents and businesses need to sort recyclables.

The facility is equipped with state-of-the-art, energy-efficient TITECH optical sorters, which achieve energy savings of up to 70%.

The TITECH optical sorters are fitted with spectrometer-based detection system, which can identify various recyclables based on their molecular structure and sort them into various streams. The plant is also equipped with screening, magnet and eddy current technology.

The Regina plant is the 15th MRF being operated by Emterra. The company follows a collaborative approach towards recycling and forms partnerships with municipalities and communities across Canada. It creates a service model tailored to a particular area and provides services accordingly.

Emterra has created a similar service model for the Regina facility. It is responsible for marketing the materials recovered at the facility. The city receives 25% of the profits earned through the sale of the recovered materials and plans to reinvest the funds in the curbside recycling programme through a reserve fund.

Cascades East Angus Recycling Pulp Unit is based in the city of Quebec in Canada.