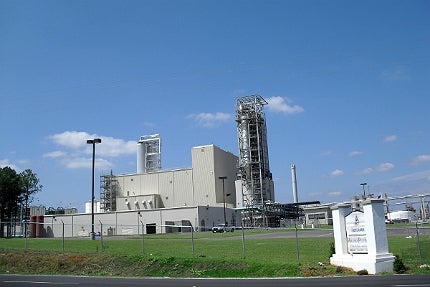 Indorama Ventures (IVL) will build its fourth PET resin manufacturing plant in the US, at Decatur in Morgan County of Alabama. The construction of the plant will start in 2013 and is expected to be completed by the end of 2015.

The new plant will be located near IVL’s existing AlphaPET plant on Finley Island Road at Decatur. The other two PET resin plants of the company in the US are located in North Carolina and South Carolina.

IVL is the second largest PET resin manufacturer in North America. The company produces fibres and yarns from polyester and polyolefins, besides producing PET resins for beverage, food, pharmaceutical and cosmetics packaging. IVL has also recently ventured into the oxides and glycols business in Texas.

IVL has been present in the US since 2003 with 700 people currently employed in its PET business. The company’s annual PET resin production capacity in North America will reach 2.1 million tonnes with the opening of the new PET resin plant at Decatur.

Details of the new PET resin plant in Decatur

"The company has a global presence with 41 production centres across Asia, Africa, Europe and North America."

The decision for IVL’s new PET resin plant at Decatur was approved by its Board of Directors in November 2012. An investment of $190m for the new plant was announced in March 2013.

The new plant will be built in a separate building adjacent to the existing Decatur AlphaPET plant. The new manufacturing facility will take advantage of readily available infrastructures at the site, as well as the ongoing PAT supply from BP Chemicals.

The new Decatur PET resin plant will produce 500,000t of resin per year for food and beverage packaging. The new production facility will create 75 jobs.

The Decatur AlphaPET plant commenced production in 2009. The plant mainly manufactures PET materials used in plastic beverage containers. The plant, with 124 employees, has capacity to produce 432,000t of PET resins a year.

The plant is located close to BP Chemicals’ Purified Terephthalic Acid (PTA) complex, which provides the PTA feedstock and other utilities for PET manufacturing.

IVL produces PET resins of different variants, such as hot-fill, low and high IV, fast heat and general grade and film grade PET resins for packaging different products, including beverages, food and cosmetics, as well as for pharmaceutical and industrial packaging applications.

The PET Packaging materials produced by IVL include PET bottles, PET preforms and closures and caps.