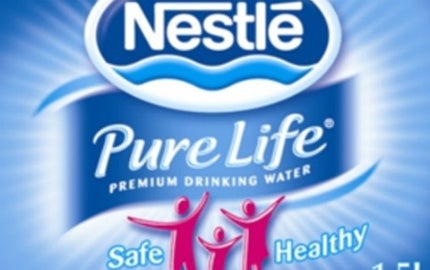 Nestlé Waters UK officially opened its new water bottling and warehouse facility at Waterswallows in Buxton, in the UK, in March 2013.

The new Derbyshire-based facility is hailed as one of the most innovative and efficient bottling facilities in Europe.

Nestlé announced its plans to construct the facility in November 2011.

Production at the facility was started in May 2012.

The planning application for the construction of the bottling facility was submitted by Cass Associates on behalf of Nestlé Waters.

Nestlé Waters invested more than £35m in the bottling facility and warehouse.

"The new Derbyshire-based facility is hailed as one of the most innovative and efficient bottling facilities in Europe."

The new factory is Nestlé Waters UK’s first bottling facility to include warehousing capabilities. The building features a wave-like roof and has a footprint of approximately 23,000m².

The Derbyshire dry stone walls are built to re-establish field patterns and set site boundaries. A 3.5km-long pipeline supplies the mineral water from the source under the Crescent building to the new facility.

The new facility uses the heat generated by the bottling lines to warm up the warehouse and office areas. It is equipped with a sustainable drainage system (SUDS) to handle the water running from the site.

With the innovative solutions incorporated by the facility to reduce the environmental impact, the company achieved the BREEAM (BRE environmental assessment method) ‘Excellent’ rating for the plant in 2013.

Measures have also been taken to cut-down the operational costs and improve the transport infrastructure and ecology of the site.

The new bottling lines manufacture the lightest weight water bottles in the UK. The U-shaped production lines are designed to significantly reduce the total energy output of the site.

The innovative new bottle design consumes 25% less PET plastic on average when compared to the existing design. The bottles are fully recyclable.

The lighter bottles feature a smaller neck and an ergonomic shape that requires less plastic. The bottle fits comfortably in the hand.

The bottling line is complemented by the new sports cap launched by the Nestlé Waters UK.

The cap includes a tamper evident seal that remains with the lid when opened. The new sports cap is available on the Buxton Natural Mineral Water 25cl (250ml), 75cl (750ml) and one litre bottles and the Nestlé Pure Life 33cl (330ml) formats.

The new bottling unit and warehouse facility enables Nestlé Waters to reduce the total quantity of water consumed in manufacturing. The company has also received zero waste to landfill certification for the facility.

It is the only bottled water manufacturing company whose market share had grown for three successive years (2008 – 2011) despite the recent global economic downturn.

Buxton Natural Mineral Water is the number one mineral water brand in Britain. Nestle Pure Life, which was launched in 2008, achieved a market share of 4.5% by 2011.