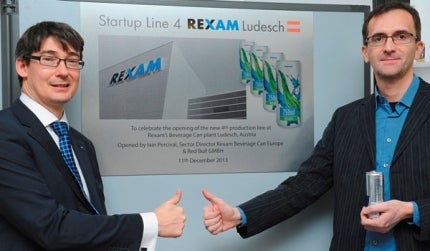 Rexam, the biggest beverage can manufacturer in Europe and South America, opened a fourth production line at its existing plant in Ludesch, Voralberg, Austria, in December 2013. The company had announced its decision to construct the fourth line in November 2012.

The Ludesch plant manufactures aluminium cans exclusively for Red Bull. The plant manufactured approximately two billion beverage cans in 2012. The new line, with a capacity to produce 8.4 million cans per day, was added with an investment of £20m ($32.79m), increasing the plant’s annual production capacity to three billion cans.

Gruppo Campari completed the construction of a new packaging and bottling facility in the US.

The fourth line was constructed to meet the anticipated growth in demand for Red Bull. The line features seven bodymakers and seven inside sprayers, and supplies 2,000 cans per minute to the high-speed filler.

The plant is located adjacent to Red Bull filling partner Rauch’s facility. The proximity eliminates the need for transportation of cans, and reduces fuel consumption and CO2 emissions for both Rexam and Red Bull.

Processing technology at the Ludesch facility

Alumina, produced from Bauxite, is used to form aluminium ingots, which are thin sheets of aluminium foil. The cups are formed from the aluminium ingots using the cupping press, followed by drawing or ironing of the cups.

Cups then go through the bodymaker process, in which the can base is formed, the body of the cup is stretched and the thickness of the metal is reduced. The resultant product is as thin as human hair.

“The resultant product is as thin as human hair.”

The cup is cut and transformed to the right size using a trimmer. The cups are then washed and dried in the washer machine and the oven respectively. The cans are printed using advanced printers, which are capable of printing eight colours at once. They are further sprayed and dried to avoid the contents from reacting with the metal.

The final process involves the provision of the neck shape. The cans are filled and fixed with ends and caps for easy opening.

Used cans are 100% recyclable within 60 days, to form aluminium ingots, windows and other materials.

Rexam, headquartered in England, operates 67 plants in 24 countries. The co-operative owns 22 can manufacturing plants in Europe, 16 plants in the US, 11 plants in South America and one plant each in Mexico, Egypt and China. One plant each is located in South Korea, Guatemala and India too.