Expand
The company produces around 1.9 billion glass containers per year but the new facility will have a total output of 370 million cartridges and 160 million vials per year.
Vial production relies on a good quality of glass tubing being supplied.
Vial inspection system during production.
Quality control is essential for the production of glass vials.
Several large US pharmaceutical companies have relocated facilities to northern Mexico and Stevanato would like to capture this market. 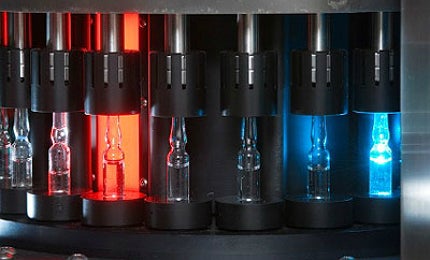 Stevanato Group is an Italian company that was founded in 1949 and is now one of the top three producers of glass tube containers for the pharmaceutical industry in the world. The company has two divisions: the glass division specialises in primary packaging of glass tube containers, such as vials, cartridges, ampoules and syringes for pharmaceutical and cosmetic use.

Members of the group include Nuova Ompi of Padua in Italy, Alfamatic of Latina in Italy, Medical Glass of Bratislava in Slovakia and Ompi of America in the US and Mexico. In addition, the engineering division designs and builds machinery and systems for the production and control of glass tube containers and is based at two sites in Italy with Spami (Padua) and Optrel (Vicenza). The group produces some 1.9 billion glass containers per year.

In February 2007 Stevanato announced that they were investing €37m into a new production facility dedicated to pharmaceutical glass production on a 50 hectare site in Cienega de Flores, Monterrey, Mexico. The new facility was needed to increase their production volume in the Americas, so that Stevanato could remain as the market leader in the pharmaceutical primary packaging market in the region and not just operate from a concentrated Italian manufacturing base. In addition, several large US pharmaceutical companies have moved to northern Mexico and Stevanato are eager to gain supply contracts.

The Mexican facility was opened on 24th October 2008. The facility mainly produces cartridges and vials using a range of technology developed by SPAMI. The second phase of the plant, which doubled the total production capacity, was opened in March 2013.

"The glass division specialises in primary packaging of glass tube containers, such as vials, cartridges, ampoules and syringes."

The new plant achieved an annual production capacity of 150 million vials and cartridges as planned, and then doubled the production during the next two years. All of the vials, containers and ampoules have to comply with the stringent international quality standards for pharmaceutical primary packaging, and to this end the company installed extensive automatic testing equipment but also set up a large quality assurance area for their product range.

Stevanato’s aim was to achieve a total output of 370 million cartridges and 160 million vials from 26 production lines at the new facility. The new plant fully satisfies the highest quality process levels because of the combined participation of the glass division and the SPAMI engineering division of the company.

The planning and construction of the new plant was internally managed by the engineering division, which closely followed the work and installation of production lines, while the glass division was responsible for training local personnel and setting up a quality philosophy. Around 20 employees of the new factory have been trained in Italy at the main production plant in order to return to Mexico and be able to guarantee the quality standards of the group.

The production at Monterrey mostly involves the conversion of different diameters of glass tubing to produce vials and cartridges as primary pharmaceutical packaging. SPAMI have developed process technology to improve the quality of glassware. The quality of the incoming borosilicate glass tubing must be carefully checked as it can often be of a lower standard than required for the manufacture of high-grade vials, syringes and cartridges.

"Several large US pharmaceutical companies have moved to northern Mexico and Stevanato are eager to gain supply contracts."

In addition, some studies have shown that glass may not be as inert as once thought with chemicals being released from the glass that could influence the effectiveness of pharmaceuticals (low alkali release glass is needed). The SPAMI system uses quality control technologies to screen the glass tubing on arrival at the plant as well as the final product. The system includes a visual inspection system (NoVIS), a system for continuous temperature measurement, and also a digital image processing system, called CLEANER, which is able to detect and remove defects in the glass as small as a few microns in the final product.

The fully-integrated process machinery provides measurement of glass tube diameter, wall thickness and temperature using infrared pyrometers (Pyrometer Annealing control) for total quality control and motorised burners provide close control of their positioning. The use of this system gives Stevanato their advantage in quality over other vial manufacturers.

Nampak Wiegand Glass has been running a glass bottle-manufacturing unit in Roodekop in the Alberton region of Greater Johannesburg since 2005.

Petstar is a division of the Houston-based recycling services company Avangard Innovative. It is located at the industrial park Parque Industrial San Cayetano, on the outskirts of Toluca city, the capital of Mexico state. The plant was officially commissioned in April 2009 after 14 months of construction. The estimated cost of the plant was $33.48m.