Expand
The Wyke Farms facility in Brunton, Somerset, has seen an increase in production of cheese.
Wyke Farms is one of the United Kingdom's largest independent cheese producers.
The company's best-selling extra mature brand of cheddar is packed using a flow wrap machine.
Wyke also produces reduced-fat healthy cheese varieties, such as the cheddar for Rosemary Conley's food range.
The Wyke Farms facility is now capable of achieving production of more than 20,000t of cheese a year. 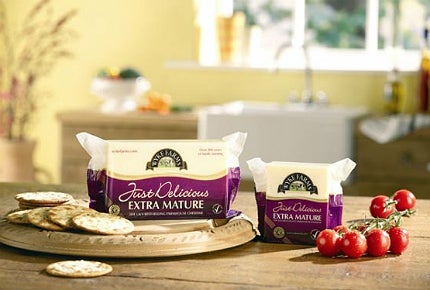 Wyke Farms is one of the largest independent cheese producers and milk processors in the UK. The company was founded on the basis of their original farmhouse cheddar recipe in 1902. After more than 100 years of cheese making the company now sells more than 14,000t of cheese every year.

"The company produces a full range of cheese as well as butter; the products range from mild to extra-mature cheddar."

The Wyke Farms cheddar brand is one of the fastest growing in the UK with a rate of 50% year on year and is available in 25,000 stores across the country. The company produces a full range of cheese as well as butter; the products range from mild to extra-mature cheddar and also half fat and very low fat cheese.

One of the latest products, released in December 2007, is a full flavour cheese for diet guru Rosemary Conley’s food range with less than 5% fat. The cheese contains fewer than half of the calories of normal cheddar but no less protein or calcium and also has a full flavour.

Rosemary Conley commented: "The indulgent taste and wonderful texture means that even the most experienced palate would find it difficult to believe this cheddar has less than 5% fat."

Richard Clothier, managing director of Wyke Farms, commented: "We have been listening to our customers carefully and are working on what’s really important to them. It’s a pleasure working with Rosemary who has been invaluable in developing healthier and really low fat cheddar."

In January 2007 Wyke Farms continued its relationship with PFM Packaging by installing an MBP14 multi-head weigher on the main packaging line at the Brunton facility in Somerset.

"Wyke Farms is one of the largest independent cheese producers and milk processors in the UK."

The new equipment was integrated with four units of PFM equipment installed after previous equipment updates.

A Scirocco, which is a servo-assisted flow wrap machine to produce airtight packs with three seals starting from a reel of heat-sealable packaging material (also designed for modified atmosphere) was installed in November 2006.

The fourth upgrade to the Brunton plant marks the confidence that Wyke Farms have in equipment from PFM Packaging.

The 14-head weigher chosen by Wyke is suitable for handling a medium to high output. It uses electric stepper motors rather than a pneumatic bucket for greater control and quieter operation. Cheese production at Wyke Farms is now capable of achieving over 20,000t a year and a weigher was required that could cope with the volume and allow high-speed, accurate operation.

The new machine is now being used to weigh grated cheese in one and two kilo bags that are sold to the service sector for the production of sandwiches and wraps and also for fast food such as pizzas.

The machine is handling 2.5t per hour (10t per shift) but can give much higher output in the future when the Brunton facility expands its cheese production volume. This equates to the weigher handling 15–20 2kg bags each minute or 20–30 of 1kg size.

Charnwood Foods in Leicestershire, which is a part of the RHM Group, is a specialist manufacturer of pizza bases for restaurants across Europe and the UK.