Concept: Swiss startup that focuses on building portable autonomous underwater drones, Hydromea has built the ExRay drone, the world’s first tetherless underwater remotely-operated vehicle (ROV) as it claims. It uses blue-LED light waves of 470 nanometers to communicate with the surface and carry out uninterrupted data transfer.

Nature of Disruption: Hydromea’s ExRay drone comprises the LUMA X underwater communication system that sends binary data over water via a fast pulse of light. These pulses are transmitted and received between two optical modems at a rate of 10 megabits per second, wherein one is installed in the drone, and the other with the user. This enables high-definition video input moderation from the underwater surroundings with minimal lag. Its current visibility range is prescribed to be 50 meters (164 feet) in clear water, and lesser in case of higher coagulation or lower ambient light, which is feasible for carrying out closed and confined applications such as tank inspections. It is 70 meters long, weighing 7 kilograms, and has seven hubless thrusters (four vertical and three horizontal). The ExRay drone is capable of taking 360 degree HD quality scans of internal structures, with six degrees of freedom, with patented disk-drive technology. It also comes installed with a cleaning brush for removing slime or algae from walls. The drone can function autonomously for at most eight hours.

Outlook: Conventional underwater drones involve long tethers to connect them with the user control system, the reason being the inability of radio waves to travel efficiently underwater. But, these cables tend to be heavy and bulky, and generally, it needs a ship or a boat to control the device, increasing overall operational costs. Hydromea aims to implement its ExRay drone to overcome such shortcomings, and enable dwelling into dangerous, confined, or unreachable areas like ballast water tanks or vessels. The ballast tank inspections can be made much easier, without the risk of the tether getting tangled or ruptured, ensuring safety, and reducing procedural costs. Hydromea’s focus lies upon the miniaturization and scalability, which it expects to achieve through the LUMA X platform offering a high form factor in addition to its existing traits. Since the application of underwater drones has been varied in recent times, including underwater garbage removal, shipping, construction, and maintenance of offshore wind farms, the startup has been working on doubling the existing range of visibility of the device to enhance operational capability. 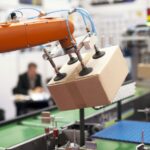