In Association with GEA

As with many industries, one of the biggest drivers in packaging currently is a concerted desire from customers and manufacturers alike to reduce the amount of plastic material required in products. Fish packaging, specifically, is no different. Thankfully, the will to change this, allied with cutting-edge new technology to enable it, are at hand.

Tackling the challenge of reducing plastics in food packaging

From the design of your food packaging to choosing the right equipment and most suitable film material, getting the balance right between lowering plastic in food packaging without compromising quality can be tricky. In this whitepaper, GEA outlines how manufacturers can find the balance without breaking the bank, including a case study that outlines how the company helped a customer to use 80% less plastics with GEA FoodTray. Download the whitepaper to learn more 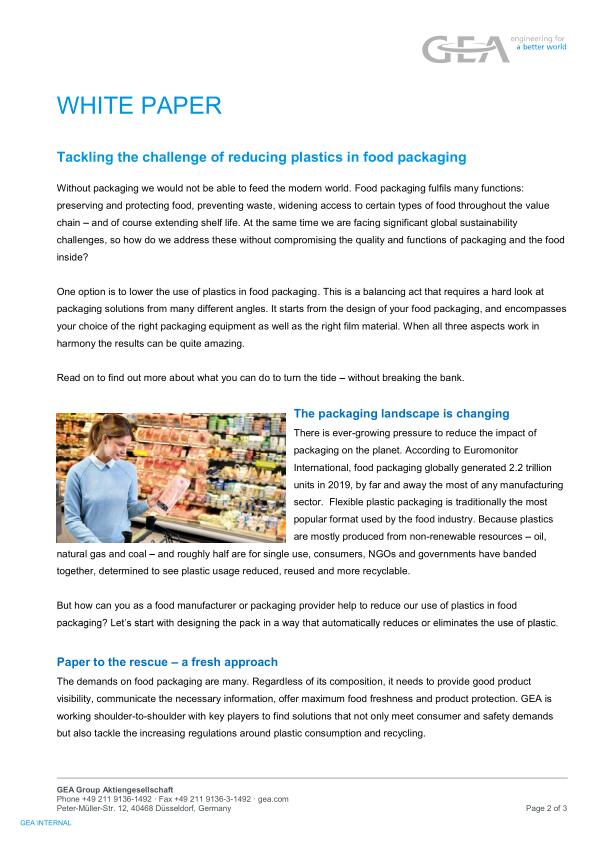 “There’s a common theme in the fish market, but also in the meat packaging sector, that customers are continuously looking to use less film and plastic. Not only because that’s the way market trends are going – with an increased demand from consumers in terms of recyclability, and not polluting the planet – but also, from a cost benefit,” says Martyn Cochrane, area sales manager for GEA in the UK.

“If customers are able to use less package and plastic material, it means they can save some cost production and get more profit,” says Cochrane, who is responsible for UK equipment sales for slice and thermoforming, whether for single machines, or those that can be combined into an automatic slicing and loading packaging line.

Packaging for ‘the new oil’

Sustainable strategies are not the only driver though. This is a sector in constant flux.

Jörg Feisel, product sales manager for GEA, has been with the company since 1978. His entire “business life” has been spent working in the realm of thermoforming packaging. Currently, he supports North and Central Europe, plus Australia and New Zealand, as GEA’s product sales manager (PSM), providing quotes for the sales team and meeting customers to get a better understanding of their needs.

Certainly, says Feisel. thermoforming packaging has revolutionized fish packaging over the past 60 years. And it’s not done yet, with major innovation still being introduced to market. “For example, we have a lot of customers in the fishing industry in Norway, where the salmon industry is significant,” he says. “The Norwegian government put out the word that salmon will become ‘the new oil’ in terms of its future value, so the sector is planning to increase its production by a factor of five in the next 10 years.”

As a consequence, the GEA team were able to install machines for its fish sector customers that feature GEA’s new PowerPak PLUS technology – the latest thermoforming packaging system that offers full visibility at the sealing station during production, plus automatic top and bottom film alignment for perfect sealing and change-over. Set-up times only take minutes.

The customers, says Feisel, are extremely happy with the machines. A large proportion of the Norwegian salmon industry exports fish products to the US, which has specific legal requirements on packaging materials. In the US, by law, the packaging material used has a given oxygen transmission rate – so-called ‘10k films’ – which are quite stretchy. Running this type of film on a standard thermoforming machine can be challenging. “We installed two PowerPak PLUS machines for one of our biggest fish customers in Norway,” says Feisel. “They were able to double the output when running 10k fish films. The superior film unwind and tracking system is able to handle these really sensitive films.”

Feisel has also seen that there is always a challenge to keep fish products – particularly sliced salmon – fresh. But PowerPak PLUS machines can help here too. “For one customer in Norway we installed the system using a Ziploc type of package. It’s the perfect reclose system. You can close to the zipper and keep the moisture and the odor in the package.”

GEA has also recently launched the latest version of its skin thermoforming packaging technology: PowerPak SKIN.50, which provides processors of sliced products, including fish, and high-quality seafood, with high-capacity packing of products of up to 100mm high that protrude up to 50mm above the level of the packing tray. “Our machine portfolio for skin packs can offer customers a full scope of skin machines for various applications,” says Feisel.

“One of the advantages of the SKIN.50 machine is its versatility,” says Cochrane. “Where the machine can be specified for skin packaging, we can also use a vacuum pack or modified atmosphere packaging (MAP) packs. We are more flexible than our competitors in terms of the options we offer customers. We don’t do ‘one size fits all’; we really do consider the customer’s needs and design the machine around their requirements. If they want a screen somewhere else, or if they want the vacuum pumps inside or out of the machine or different pressure sensors for whatever reason, that’s something we can accommodate. That flexibility isn’t just reserved for the design and ergonomics of the machines, but also the spares and after-sales service.”

GEA’s PowerPak PLUS machines gives operators a full visibility of the sealing station during production. It has proven to be something of a game-changer for the market, says Feisel. “Machines have moveable parts, including knives cutting the film, so, to keep the machine safe, we put a safety enclosure around it. The state-of-the-art solution, which also helped the efficiency of the new generation machines, has a revolutionary new design on its safety covers.”

The new machines have been designed with a sliding door that remains permanently attached. To get access to the sealing station, for instance, the operator slides the door downwards. Once they have completed their task, they pull the door back up. All the time, the safety feature stays on the machine, never coming into contact with the floor or any contaminated areas.

For Feisel, another important feature is the sophisticated film unwind and tracking system, fully controlled by the machine itself. A standard thermoformer requires an operator to keep an eye on the top film tracking. “If the top film moves a little bit to the front or back, you have to compensate by making mechanical adjustments to get the top film re-centered,” he says. The PowerPak PLUS does this fully automatically with sensors tracking the top film position. “If it gets off position the machine automatically readjusts the film reel to ensure the top film is 100% centered and never out of position,” adds Feisel.

Those pivotal efficiency gains matter. Customers, says Cochrane, are also increasingly looking for an efficient packaging machine that can facilitate a multitude of plastics, rather than single use. “It’s important for customers to stay ahead of the game,” he says. And GEA’s FoodTray solution certainly embodies this progress. “For supermarkets, in the next year or two there’s going to be quite a big shift. At the moment in supermarkets you don’t see an awful lot of food tray-type products, where there’s a lot less plastic employed. It’s probably not changed much in the last 5-10 years, but this innovation is gathering pace and, as we get the word about FoodTray out there, we will see fundamental changes in the next year or two.”

FoodTray is a sustainable solution that saves up to 80% of plastic film, so how important is this reduced impact on the planet to your customers? “It’s the way the industry is going,” says Cochrane. “It’s the perception that plastic is bad, and paper is good. The challenge we have in the UK is no one wants to be the first to say, ‘Let’s package things this way.’ So, we are targeting supermarkets and explaining that this technology exists. We just them to convince customers to make the change.”

A new UK tax being introduced from 1 April 2022 on plastic packaging manufactured in, or imported into the country, that does not contain at least 30% recycled plastic may well force the issue, says Cochrane. “That tax will probably ramp up again in the following year. And once you start affecting people’s bottom line, they’ll start to make changes. The tax may make the industry look at alternative methods.”

The FoodTray itself has some alternative features, particularly its design. It has a thin bottom line, reinforced by cardboard to showcasing its attractive design. “You need a rigid bottom supporting the modified atmosphere pack and protecting the product, but with our FoodTray, we have reduced the amount of rigid bottom film with the cardboard percentage – but we still keep the functionality. The product is protected by the strength of the lower film. It has a great presentation,” says Feisel. And for marketing purposes, companies can print brand messaging or information on five locations on the cardboard.

Customers are increasingly eschewing meat and looking to fish – including processed fish products such as fish balls and fish burgers – as an alternative protein in diets, but it’s not the only trend impacting on this sector. “Packaging materials for fish products are getting thinner,” says Feisel. “That means the equipment has to be able to cope with this changing material demand.”

Away from consumer packs – salmon filets, salmon skin packs, fish burgers – there’s also a significant need for innovative primary packaging in the pelagic industry, where fish live in the pelagic zone of ocean or lake waters, neither close to the bottom nor near the shore. “The quotas for fishing vessels have decreased over the last 10 years,” says Feisel, whose team has developed machines to pack herring. “A typical pack is a 20-kilo pack of herring which contains a couple of liters of brine. This goes into the freezer and is sold to customers in the delicatessen industry. The successful guys are the ones who can catch the fish, get it onshore and process the fish in the quickest possible time.”

Tackling the challenge of reducing plastics in food packaging

From the design of your food packaging to choosing the right equipment and most suitable film material, getting the balance right between lowering plastic in food packaging without compromising quality can be tricky. In this whitepaper, GEA outlines how manufacturers can find the balance without breaking the bank, including a case study that outlines how the company helped a customer to use 80% less plastics with GEA FoodTray. Download the whitepaper to learn more