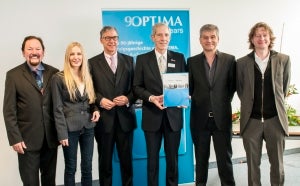 Be it pharmaceuticals, medical or paper hygiene products, coffee, tea, food products or cosmetics – wherever the filling and packaging products of daily need require the highest standards of hygiene, the name ‘Optima’ is heard. On November 21, 2012, Optima celebrated its 90th anniversary. This occasioned the publication of a lavishly illustrated anniversary book. On 150 pages, it chronicles the journey of this Schwäbisch Hall-based company from its humble beginnings to the top of the global market in packaging machine construction.

The history of the filling and packaging machine manufacturer Optima is exemplary for the rise of mechanical engineering in Southwest Germany and offers ample material for history and its anecdotes and stories. Many of these have been collected by author Peter Tognotti to illustrate how the "special factory for automated precision filling machines," located in the Alte Reifensteige in Schwäbisch Hall in the early 1920s, was able to expand into a medium-sized high-technology enterprise that today employs more than 1.500 workers around the globe and has cornered a significant share of the world market with its innovative industry solutions.

In ten chapters, the book highlights the numerous aspects that emphasize Optima’s continuing growth – foremost among them the company’s founding history. The book tells the story of company founder Otto Bühler from Esslingen, who – following the advice of his friend from Schwäbisch Hall, pioneering special machine engineer Wilhelm Stirn – decided to switch from his previous occupation, the production of pasta, to the construction of filling weighers.

The book spans a wide range of topics, from the changing world of goods and products to rising export rates and the "success factor man," finally hitting on the legendary machines of the OPTIMA brand. In this context, it mentions a mechanical precision filling machine that may now be admired in the German Packaging Museum in Heidelberg, and a sealing apparatus for bags that applied the Clipfix principle.

In addition, the book tells of important events that served as milestones in the company’s development, e.g., the first packaging machine for hygiene products in 1970 or the foundation of its US subsidiary 14 years later. The chronicle also covers the significant role that technology leader Optima plays in today’s single-serve product packaging market.

Last but not least, the anniversary book shines a light on Optima’s leading personalities, central among them the protagonists from the Bühler family enterprise. Numerous anecdotes and quotes enliven the highly factual and elaborately researched narrative.

The publication "90 Years of Optima – Establishment and Growth of a Leader in Technology " was realized by the advertising agency Karius & Partner in Leonberg, which was also responsible for the 2011 publication of the industry’s anniversary book "Tinkerers, inventors, guarantors for success: 150 Years of Packaging Machine Construction in Southwest Germany." This publication already introduced Optima, along with other member companies of the technology cluster "Packaging Valley Germany e.V.," on a larger scale.

The new, 150-page anniversary volume "90 Years of Optima – Establishment and Growth of a Leader in Technology" designed by Jürgen Siegl, was officially released during a reception at the OPTIMA pharma GmbH in the presence of illustrious guests from the world of politics, economy and society. Additional information is available at: www.optima-ger.com

Changing Markets. Your Needs. Our Passion. This is the motto under which Optima will be...

UK-based automation specialist Optima’s innovative MDC300 solution is a high-performance system that has been carefully...

Optima will be presenting innovations at Interpack 2017 under the motto 'Mission Total Care'.New HMI...