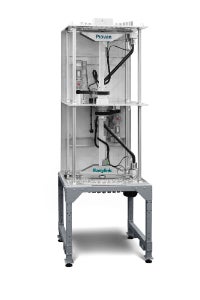 Piovan has announced a new range of automatic coupling stations, which will be launched in 2015.

Manual coupling stations are widely used in the plastics processing industry, which are suitable for handling moderate workloads.

In the case of multiple uses, connecting flexible pipes to the right source, and moving them as required, can be a complicated and tiring task.

The pipes are coded, as managing several pipes can cause problems such as dirt that needs to be constantly removed, and the use of connections that over time wear out, and have to be removed or replaced.

Since 1989, Piovan has made automatic coupling stations as a safe alternative to manual systems involving multiple sources and uses.

Approximately 600 Piovan coupling stations are installed worldwide, more than half of which have been installed in the past four years, highlighting the growing success of this solution in many industrial sectors.

In 2015, Piovan has launched its new Easylink range of coupling stations consisting of 3 models: EL 20, EL 40, EL 60 (the first digit indicates the number of sources, the second the number of destinations).

The Easylink range is fitted with a device that thoroughly cleans the conveyor pipe when a different material is being handled on the next cycle.

The stations have a single, rigid and enamelled selection pipe, which handles polymers of all hardness grades, with a variable diameter of 40mm, 50mm-60mm and 76mm for small, medium and large capacities.

Easylink is the only coupling station range that can manage a high number of sources and destinations, and has a capacity ranging from a few to thousands kilos per hour.

An Easylink station has the following components:

The simple design of Easylink facilitates management and maintenance, limits wear and tear on components, and ensures utmost reliability even under severe operating conditions.

The first system, which was installed 25 years ago, is still in operation.

With a wide range of units and components, Piovan develops handling and conveying systems specifically customised for PET plants, able 3,000kg/h and cover distances of...