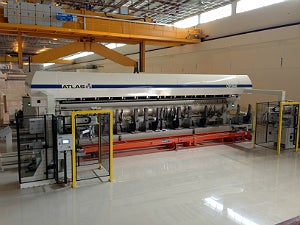 Atlas Converting Equipment completed the installation of the very first ‘next generation’ Atlas CW1040 Series primary slitter rewinder at Tri-Pack Films, based in Karachi, Pakistan at the end of December 2012. This 8.7m-wide primary film slitter has been installed in conjunction with a new high-speed BOPP film production line, also scheduled for start-up at the same time.

Tri-Pack Films is a public limited company and is a joint venture between Mitsubishi Corporation of Japan and Packages, of Pakistan. The company was incorporated in 1993 and commenced commercial production in 1995. It is a long established producer of BOPP film in Pakistan for both domestic and export markets, and in 2011 generated revenue in excess of Rs.12.2bn ($127m). The addition of the new BOPP film line will more than double the company’s annual production capacity of plastic films to 70,000 tonnes per annum.

"We installed our first Atlas primary film slitter almost 20 years ago and added two smaller Titan duplex slitter rewinders for our narrower width materials later on. Together with the 3m wide Atlas CW800 slitter for metallised film installed with our CPP line in 2008, we have been very satisfied with the performance of all the Atlas & Titan equipment."

"More importantly, the improvements in the design and technology of the new generation CW1040 and CW3600 Series slitters are impressive and reflect the leadership that Atlas has in the film slitting industry," he confirmed.

"We are delighted to be collaborating with Tri-Pack Films again," added Peter Turner, sales manager for Atlas. "We look forward to the start-up of the new film line and being part of the company’s success during 2013 and beyond."