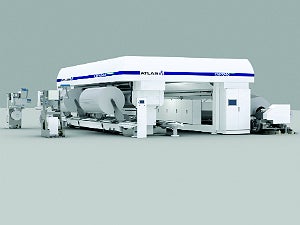 Atlas Converting Equipment is pleased to confirm its participation at the Arabplast 2013 exhibition in Dubai, UAE, from 7-10 January, at Stand 4D135 in Hall 4. The company will present its ‘next generation’ Atlas CW Series and Titan SR9 Series slitter rewinders for a wide range of plain, coated and printed plastic films and other flexible materials.

The new Titan SR9 Series slitter rewinders will also be presented at Arabplast 2013. In the development of the Titan SR9 Series, Atlas focused its product development strategy on achieving significant reductions in machine downtime for printers and converters, with lower operator intervention and also reduction of costly waste materials – which all adds up to outstanding gains in productivity.

The concept of the Titan SR9 Series technology platform features three separate machine modules of unwind, slitter and rewind sections. The idea being that a converter need only change the rewind section of the machine from a duplex shaft (DS) to a single turret (ST) or dual turret (DT) configuration, to meet increasing production requirements, without the need to change the existing unwind and slitting modules.

The Titan SR9-DT Dual Turret rewinder was launched at the end of 2011 and the duplex shaft (DS) module was introduced earlier this year. The single turret (ST) module will be available early in 2013.

A newly designed linear tracking slitter (LTS) section on all SR9 modules ensures the shortest and most constant web length between the knives and the rewind shafts for improved web control, giving the highest possible side wall quality of rewind reels – which also reduces the possibility of waste material.

To maintain a focus on its objectives for sustainability, the Titan SR9 Series has many features for achieving reductions in the cost of energy and of waste materials. Elimination of all hydraulics helps to provide a cleaner environment and the use of high efficiency motors and regenerative braking enables a considerable reduction in energy consumption, making the SR9 Series the most efficient slitting-rewinding solution in the Titan range.

The Titan SR9 Series is set to smash all productivity records by providing a genuinely flexible and sustainable new approach to slitting and rewinding.

A new service platform for both the Atlas & Titan range of slitter rewinders provides expanded global customer service and support operations, with engineers not only based in the UK but also in the US, Latin America, India and in China.