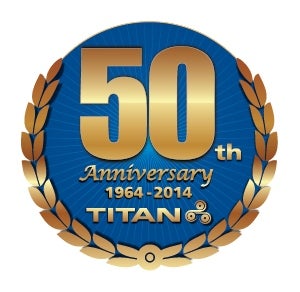 Atlas Converting Equipment Ltd. is pleased to announce that during 2014 it is celebrating 50 years of excellence in slitting and rewinding technology for its Titan range of products. To mark the occasion, special 50th anniversary open house events will be held during the autumn of 2014 at Atlas Converting Equipment Ltd. in Bedford, UK, and at Atlas Converting North America, Inc. in Charlotte, NC, USA, when the latest Titan slitter rewinder technology will be demonstrated, together with some of Titan’s partner suppliers.

All Titan slitter rewinders sold for delivery during 2014 will feature a special 50th anniversary machine livery, and those customers will also receive a commemorative gift. Pages dedicated to the 50th anniversary are viewable on the Atlas-Titan website with a history of Titan, its machines and milestones, which all started back in 1964 in London.

The first Titan duplex slitter rewinder was built by Frank F. Pershke Ltd. that year when the company was based in Bow, in the east end of London, and the SR1 model was the first machine introduced in the Titan SR series. It was sold to Independent Newspapers Ltd. in Dublin, Ireland, but unfortunately was never installed as a result of hitting a low bridge during transportation! Unsurprisingly, the SR2 model replaced it the following year and by the mid-1970s sales of the Titan SR3 slitter were rapidly gathering momentum.

"The Titan brand has become synonymous globally with high-quality and high-performance slitting and rewinding technology, and with more than 2,500 installations in more than 70 countries it is widely acknowledged as a leading supplier in its market sector."

Following relocation of the company to south London and in a period of no more than ten years, the Titan name had become established as a successful twin-shaft cantilever slitter rewinder and had been exported and installed in many countries around the world. Its success was of course in part linked to the huge development of extruded plastic film used for flexible packaging materials, which expanded rapidly worldwide during the 1970s, 80s and 90s.

Of all the Titan SR duplex slitter rewinders produced over the years, the SR6 model was the most successful with 570 machines sold over a period of almost ten years from 1990 to 2000. Currently, the Titan SR9 series is bench-marking slitting and rewinding technology with many unique design features to maximise productivity and rewind reel quality for converters.

The Titan brand has become synonymous globally with high-quality and high-performance slitting and rewinding technology, and with more than 2,500 installations in more than 70 countries it is widely acknowledged as a leading supplier in its market sector.

To read a brief and nostalgic history of Titan over the last 50 years and for more information, click here.

Investment in plastic film production lines in China has been dramatic in recent years and...

Atlas Converting Equipment will participate at no less than four regional exhibitions during the first...