Asylum: An Installation Created in an Industrial Setting 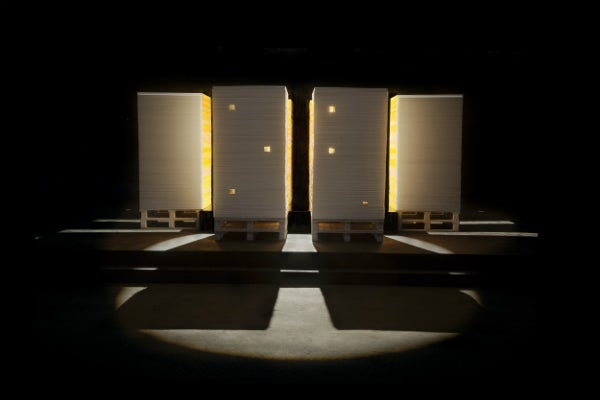 In an industrial workshop in Strömsbruk in northern Sweden, multimedia artist Nils Olof Hedenskog is working up a sweat. Within six months he will create an installation that it is hoped will attract interest from many art institutions around the world. The raw material is paperboard and he is working with Invercote from Iggesund Paperboard.

"For me there exists a tension between the limitlessness of art and the fact that I am in a strict, production-oriented environment where everything is based on rationality," he says during a break from his work. "I have six months to create something that represents this tension."

Iggesund Paperboard, which offered him the opportunity to be an artist in residence, has a long tradition of working with artists. When the company celebrated its 300th anniversary at the end of the last century, it asked the well-known Swedish painter Mårten Andersson to depict various aspects of its production process.

For the past 15 years Inger Drougge Carlberg, a textile artist who has increasingly been working with paper pulp, has had a studio on site at the mill. And five years ago Iggesund challenged packaging designers with its Black Box Project, which seven international designers had to fill a box of specific dimensions with contents that challenged the performance abilities of the company’s most successful project, Invercote.

"We manufacture the basic material paperboard so we are a very long way back in the processing chain," explains Staffan Sjöberg, who works at Iggesund’s market communications department. "Our own success is very dependent on all the creative people around the world who make fantastic things from Invercote. So of course we want to foster creativity both on the artistic level but also in the form of the innovations that our customers in the packaging segment put their heart and soul into."

He readily admits that the end goal of Iggesund’s creative joint projects is to sell more paperboard. But to attract attention in the creative world a company must step outside the traditional commercial pathways, dare to hand over control and see where external creative forces can take it.

"It’s a balancing act," he says. "In traditional business communications the aim is to control everything. In projects like this one you have to dare to give up control so that your efforts to communicate will hopefully reach further than those based on traditional methods."

In the industrial workshop Nils Olof Hedenskog is working on models of an installation that will be built of paperboard with a special structure. The aim is to present the installation at an exhibition in the summer of 2015.

"I’ve worked with paper-based materials for several periods during my artistic career," he says. "Now it feels terrific to be able to work with material from Iggesund, which has such strong environmental documentation."

His installation has the working name of ‘Asylum’ and consists of six paperboard towers enclosing a space. Viewers can look into the space but not enter it. On the outside the towers are not coloured; their structure together with the lighting will create various nuances of grey. On the inside they are painted in fluorescent colours, which will create light that will radiate out between the towers and through peepholes.

"I’m creating a reflection of the current situation in Europe, with hundreds of thousands of refugees who want to get inside but who most often only get a glimpse of what is inside Europe’s walls," Hedenskog explains.