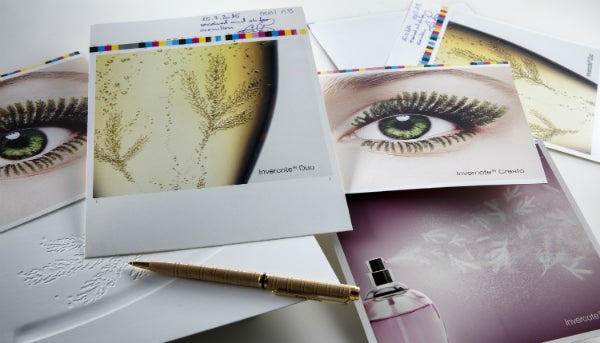 When a book of paper samples arrives in the post, the recipient is often most interested in the samples themselves. When Iggesund Paperboard begins to distribute its new swatch book of Invercote G, Invercote Creato and Invercote Duo this winter, recipients have good reason to study the embossings which heighten the effect of the book’s photos.

"Invercote has a dimensional stability and flexibility which make it a fantastic choice for people who want to use embossing to give their brochure or other printed material a third dimension," explains Alex Guglielmi, one of Iggesund’s market technicians. He supervised the book’s production with a special focus on the embossing. "It can heighten the tactile experience, attract more attention and, not least, reinforce the experience of quality."

Good tools are needed to achieve good-quality embossing. For this production Iggesund worked with the Swiss toolmaker SMR Stanztechnik.
"In the swatch book our main task was to emboss the details in the photos," Alex says. "In doing so, it’s important not to change or distort the basic concept of the image."

One example is the large embossing of an island on the cover. The embossing runs across the front cover, spine and back cover. The first test embossing of the image made a stone, which had been in the background, appear to have moved closer to the viewer.

"We had to remake the tool to avoid creating this effect and now we’ve achieved the right balance between the image and the embossing," he says.
In another photo the embossing of an eye had to be redone. The effect was not clear enough so the tool had to be adjusted to create a more obvious visual impression.

Another effect Alex likes to mention is how the printing and embossing of the name Invercote work together on the first page of the sample book.

"It’s really easy to go wrong doing this," he said. "I usually recommend that people really think about and understand what they are going to highlight with embossing and printing. As it is a symbiosis between the paperboard, embossing tools and printing, it’s far easier to detect the smallest misregister when you emboss along straight lines.

"Often output and quality are misunderstood. So when you have these demanding elements coming together, I often recommend reducing the number of single positions per sheet to achieve the best registration between printed and embossed images."

When a project calls for finishing processes that require multiple press passes, Invercote’s dimensional stability provides exceptional registration. Normally, printers find themselves trying to convince their clients to limit the number of press passes in order to avoid registration issues. But Invercote’s dimensional stability allows you to take on heretofore unimaginable challenges.

To demonstrate Invercote’s superior performance in this area, Iggesund has produced printed projects with more than 20 press passes with outstanding results. Of course, print costs normally discourage such undertakings, but for those who are prepared to spend money in finishing, consider Invercote as insurance on the finished product’s exquisite result.

Iggesund’s sample book was printed by VR Print in the UK and the embossing tools were produced by SMR Stanztechnik in Switzerland.