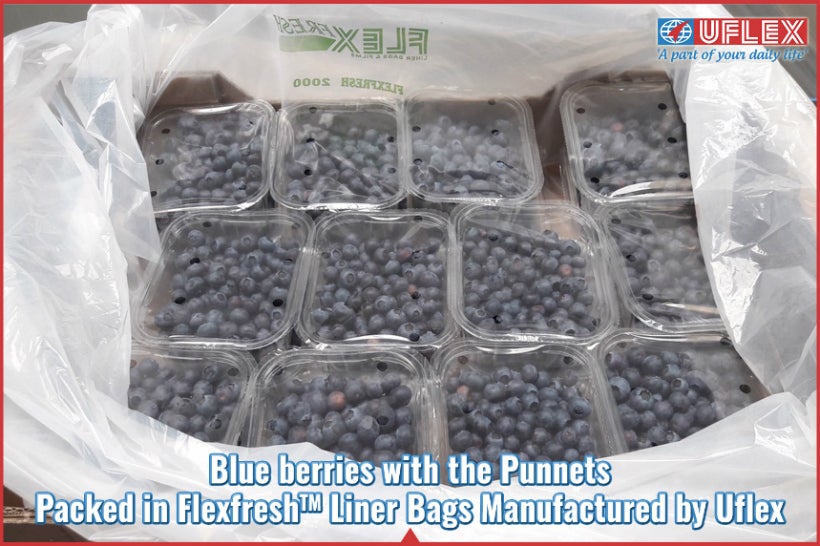 The proof of the pudding is in the eating. This is exactly what Flexfresh™ liner bags by India’s largest multinational flexible packaging materials and solution company Uflex Limited have just proven.

Recently a prominent European Retail Chain conducted a litmus trial with Flexfresh™ liner bags by shipping blueberries from South America to Europe. This journey usually takes more than five weeks by sea. The results have been more than astounding. While the loose blueberries resulted in an average weight loss of 19.96%, those packed in Flexfresh™ shed merely 0.76% weight after a period of seven weeks, thus registering a phenomenal 96% reduction in weight loss upon arrival.

Notably Flexfresh™ works on the principle of Active Modified Atmospheric Packaging (AMAP), a solution that Uflex has launched globally in collaboration with the Perfotec BV of the Netherlands. While Flexfresh™ is a special patent protected polymeric packaging film manufactured by Uflex for packing fresh fruits, vegetables and flowers; Perfotec supplies the Fast Respiration meter for ascertaining the respiration rate of the fresh produce and the associated software for calculating the required film permeability.

The Perfotec laser system subsequently uses this information to adapt the permeability of the film offered by Uflex through micro perforations. This solution maintains the ideal oxygen and carbon dioxide inside the liner bags to maintain freshness and extend shelf life of the product.

The results also established that pre-packing itself is not enough as it can address the issue of weight loss but not quality. Punnets with and without liner bags resulted in 0.76% and 2.56% weight loss respectively. Both these figures are significantly lower than the 19.96% weight loss registered in case of loose blueberries. The punnets that were not using liner bag still showed the same quality problems like mouldy blueberries.

Upon successfully testing Flexfresh™ liner bags for sea freight of blueberries Mr N Siva Shankaran vice-president, Flexfresh™ at Uflex Limited said: "This test indeed is quite a feat and has instilled a lot of faith in our Flexfresh™ packaging solution. More business queries are flowing in. The recent trials have successfully established a shelf-life of seven weeks for the soft fruit without using sulphur pads that cause irritation while consuming.

"The European Retailer is confident that Flexfresh™ Liner bags for blueberries from the Southern Hemisphere would be used for all shipments in a short span of time. Supplying blueberries by sea will significantly bring down the logistical costs for the importer. It is a clear win-win both for the exporters in South America and the importers in Europe thereby boosting the trade prospects on the whole."

Expressing delight over the successful trials of Flexfresh™ for blueberries, Mr Ashok Chaturvedi, chairman and managing director, Uflex Limited said: "Our association with Perfotec BV for bringing contemporary Active Modified Atmospheric Packaging Solution to the world is graining traction by the days. More and more product trials are taking place.

"The success rates are encouraging. I would like to congratulate and thank the engineers both at Uflex and Perfotec for their unrelenting efforts to bring such an effective packaging solution that is already calling the shots in the global fresh produce sector."