You have successfully subscribed and will receive the next available issues 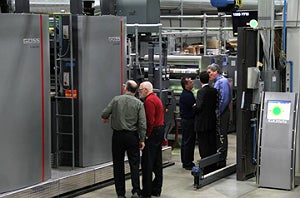 Packaging producers from Europe and North America saw a Goss Sunday Vpak press system print with high quality at high speeds on wide webs during a series of demonstrations at the Goss International headquarters in the United States from February 25 to March 1. Goss International customised demonstrations on the Sunday Vpak press throughout the week, printing on a variety of film substrates ranging from nine micron PET to 28 micron BOPP at web widths in excess of one metre.

The demonstration week, which focused on flexible packaging applications, followed a similar programme held at the Goss International facility in New Hampshire in late 2012, to demonstrate the capabilities of Sunday Vpak presses for folding carton and pre-printed liner applications.