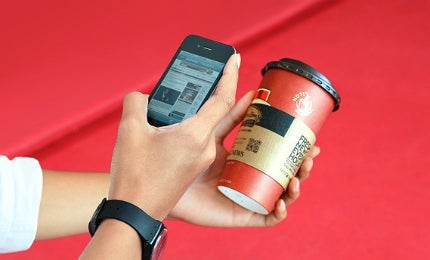 The old saying ‘don’t judge a book by its cover’ is often seen as a myth in the packaging and branding world. Advertisers, designers and brand-makers endeavour to make the most eye-catching and innovative wrappings they can, to attract would-be customers to their products.

In recent years, however, building a two-way relationship with consumers, allowing them to engage with brands on a deeper level through outlets such as social media, is becoming increasingly important.

Scott Morris, professor and director of the Packaging Laboratory at the University of Illinois and author of Food and Package Engineering, explains: "The advantages of combining packaging with a broader web experience or a media linked experience is like combining the physical and social world."

Hot off the press: headlines on coffee cup sleeves

"The heat-resistant cardboard sleeve, available with every cup of Tim Hortons coffee, now has up-to-the-hour headlines."

The heat-resistant cardboard sleeve, available with every cup of Tim Hortons coffee, now has up-to-the-hour headlines from the Gulf News Twitter feed printed across the front. The sleeve also has a URL and quick response (QR) code, which looks similar to a product barcode so smartphone users can scan the code for the full story on the Gulf News website.

This informative cup sleeve was the brainchild of Dubai advertising agency Y&R Dubai. The idea behind the campaign was simple. "It entered our heads that whenever we have coffee, we’ve got to read something. It’s a marriage which just works," explains Y&R Dubai’s creative director Joseph Francis Bihag.

Gulf News wanted a measurable result: an increase in subscriptions. "Not just subscriptions but increased Twitter followers and to drive traffic to the website as well, which was quite a big task," adds Bihag.

Luckily for Bihag, the campaign has been a roaring success; approximately 2,900 extra Gulf News Twitter followers were gained after the first two weeks of the campaign and during the past four or five months, traffic to the Gulf News website has grown by 41% with subscriptions up by 2.8%.

Morris, who likes the idea behind the cup sleeve, feels its success could be taken one step further by researching the demographics of the customers using the QR code to visit the website.

Technology is continuously moving forward and the in-vogue social sites are constantly changing, so being quick rather than technically clever is arguably the aim of the game.

"In recent months advertisers and advertising agencies have seen the potential of Twitter for instantly getting the message across and we saw that as well. We immediately jumped on that idea and just did it," says Bihag. 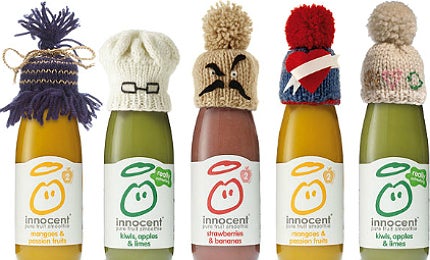 Hines believes Innocent bagged the top spot because they have a great name, a great product and great packaging

Smoothie-maker Innocent Drinks has also found success in combining packaging and social media to promote its brand, so much so that the company won first place in 2012’s Social Brands 100 list. Hines believes Innocent bagged the top spot because they have a great name, a great product and great packaging, "so they win in all of the categories really".

"Social media is a two-way street, allowing brands and consumers to engage with one another."

Joe McEwan, Innocent’s communities manager, adds: "We listen and respond creatively to everyone who gets in touch and we show people that we’re listening in bigger ways too."

McEwan was quickly proved right, as not long after Hines posted a tweet about mentioning Innocent in our interview, Innocent (@innocentdrinks) replied: "Thank you. What was it you liked? Always good to know what we do well and not so well."

One campaign that demonstrates the ingenuity behind Innocent’s joint social media and packaging branding is the annual Big Knit. The annual campaign has instructions for making Innocent bottle-sized knitted hats on its website, along with downloadable Facebook-sized cover photos to promote it on individual Facebook timelines.

Morris says Innocent’s social media strategy works because "someone’s been very clever and very light-hearted. It makes it easy to get into, pleasant to get through and very engaging," he adds.

The packaging brands making headway in using packaging and an online presence to engage with customers are creating their own websites, internal links and mobile platforms.

One of the most fun examples, says Morris, are Heineken’s giant QR code stickers that are given out at festivals to encourage festival-goers to go online to unlock the code and discover what other people’s stickers say.

Morris believes there are intriguing possibilities with this, as immediately you’ve got thousands and thousands of people playing in your virtual space.

Similarly, says Morris: "Doritos did a campaign a couple of years ago where they had a mystery flavour chip and there was a QR code, where you could log in and name it and there was a big contest and a £20,000 prize at the end of it for the winner."

Social media is a two-way street, allowing brands and consumers to engage with one another. The downside to this open communication is that consumers are able to voice their opinions quite loudly when they dislike a packaging design or logo.

"That’s what’s happened to Tropicana when they went through a complete rebranded design and the consumers absolutely hated it," says Hines.

The contest, called ‘Dub the Dew,’ asked an online audience to name a new soft drink by the Mountain Dew brand, but was reportedly spammed with unlikely or offensive suggestions, such as ‘Hitler did nothing wrong’ and ‘gushing granny’.

Mountain Dew’s official twitter account @Mtn_Dew sent a tweet to the Reuters social media editor to explain the incident. "Dub the Dew definitely lost to the Internet. It was a local customer programme, not a Dew one, and we’re helping them clean up," it read.

How to: using social media and packaging to promote brands

Fortunately, Morris has a four-item checklist brands can use to promote themselves online successfully.

"Give consumers a reason to stay, and finally give them a reason to share, contribute and play in your virtual space."

Smaller brands might find it easier to set up a free Twitter or Facebook account, but, as Hines explains, the pages need to be updated "consistently and with a plan in mind". She also points out that it’s impossible to be on every form of social media and make a statement, but "whatever form you use, choose the one with the most people that will follow you".

Using packaging and social media to promote a brand is still in its infancy, according to Hines. But Morris believes that advances in technology are making it "a rapidly changing landscape". The trick is to use the latest tools available, whether it is a QR code or social site, to engage with consumers on a deeper level.

As Y&R’s Joseph Bihag puts it: "I think making it a personalised experience is the way we should go in future. How can we tailor experiences that benefit an individual, not just as a mass or a whole?"