Expand
The Longkou crepe paper production facility was opened in November 2012.
The plant is located in the Zhu You Guan Industrial Park in the Shandong province of north-eastern China.
The Longkou facility will mainly produce medical paper used for sterilised wraps.
The joint venture contract to build the €21.9m ($28.6m) Longkou plant was signed between Ahlstrom and Longkou Yulong Paper in October 2010. Image courtesy of Longkou Yulong Papermaking Co., Ltd. 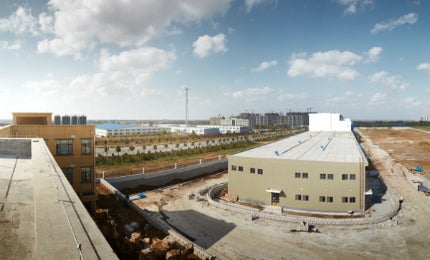 A new crepe paper production facility in Longkou in Shandong province of north-eastern China was unveiled in November 2012. The plant will produce crepe paper for medical packaging, as well as masking tapes for the building industry.

The new plant was realised through a joint venture initiative between the Finnish company Ahlstrom and the Chinese company, Longkou Yulong Paper.

Ahlstrom produces a variety of fibre-based materials for a number of industry segments, including food and medical packaging. It has a global presence in 28 countries with 3,800 employees. The net sales of Ahlstrom for 2012 totalled more than €1bn ($1.3bn). It opened the Longkou production plant as part of its growth strategy for Asia.

Longkou Yulong Paper is a pulp and paper making company in China which was privatised from the former state-run company, Shandong Longkou General Papermaking Plant. Longkou Yulong Paper took interest in the new plant for the high performance crepe paper technology from Ahlstrom.

Construction of the new plant started after the joint venture project was approved by the Shandong Provincial Development and Reform Commission in September 2011. The construction was completed by September 2012.

"Ahlstrom produces a variety of fibre-based materials for a number of industry segments, including food and medical packaging."

The new crepe paper production facility in Longkou will produce medical paper used for sterilised wraps and masking tape base paper used in the building industry. The plant will produce these speciality papers from paper pulp using crepe paper technology.

Longkou is Ahlstrom’s third crepe paper production facility, after the Pont Audemer facility in France and the Kauttua facility in Finland.

The Longkou plant employs around 140 people. The crepe paper mill is expected to produce 28,000 tonnes of medical packaging paper and non-woven fabrics per year. The output of the Longkou production facility is targeted for the Asian market.

The production facility is strategically located in the Zhu You Guan Industrial Park, which has close proximity to a large commercial port. The plant has good connectivity to China and Asia both by road and sea. The strategic location of the facility allows for procuring its raw materials as well as shipping its finished products conveniently.

Ahlstrom, with its strong presence in Europe and America, has been aggressively pursuing manufacturing and marketing opportunities in Asia and particularly in China since 2010.

"Ahlstrom and Longkou Yulong Paper hold 60% and 40% shares respectively in the joint venture."

The company became owner of the Binzhou flirtation plant of China with the acquisition of Shandong Puri Filter & Paper Products Company in 2010. A €30m ($30m) investment was announced later to start production of wall covering substrates at the Binzhou plant from 2013 onwards.

Apart from Longkou and Binzhou production facilities in China, Ahlstrom has three other manufacturing bases in Asia, which include the Hyun Poong facility in South Korea that produces filtration materials, the Mundra facility in India producing nonwoven fabrics for the medical market, and the Wuxi site in China, which is engaged in dust filtration.

Ahlstrom has nine sales offices throughout Asia and earns ten percent of its sales revenue from Asia.

Ahlstrom is currently focussing on the marketing of its products from its Longkou, Binzhou and Mundra plants based on cost and quality advantages over the locally produced materials.

Tetra Pak inaugurated a new packaging materials plant in Hohhot, in northern China, in 2009, shortly after commencement of production in December 2008.