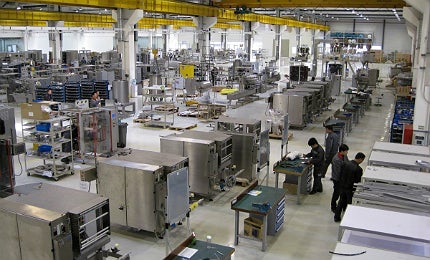 The plant manufactures packaging machinery, 80% of which is sold in the Chinese market and the rest in south-east Asia. It caters to the pharmaceutical, food and confectionary industries.

The plant covers 3,000m² and employs nearly 390 workers. Producing 400 machines a year, it is the largest factory owned by Bosch in Asia.

"The plant manufactures packaging machinery, 80% of which is sold in the Chinese market and the rest in south-east Asia."

Bosch Packaging Technology (Hangzhou) was founded in 2001 with 14 employees. The assembly line was opened in January 2002 with the first machinery assembled for the pharmaceutical industry.

The production line began operations in June 2003; a sales, marketing and after-sales office was opened in September 2003. Production of packaging machinery for the confectionery industry began in 2005.

In October 2006, the factory was shifted to its current premises in the Hangzhou Economic and Technological Development Zone to facilitate expansions.

Bosch embarked on an expansion of the plant in May 2011. It was officially opened in October, coinciding with ten years of the plant’s operations and the 125th anniversary of the Bosch Group.

"Producing 400 machines a year, it is the largest factory owned by Bosch in Asia."

The expansion added a third floor to the building with 1,400m² of space. It accommodates 120 new employees. The company invested CNY9.6m (€1.1m) in the expansion.

The plant was shifted to the Hangzhou Economic and Technological Development Zone from its previous location, to cater for the expanding production plans of the company. In addition to tax concessions, the site provides the advantage of proximity to the market.

The facility is strategically located near the pharmaceutical and food industry hubs which it caters to. The zone has five pillar industries: biology and pharmaceutical, food processing, machinery and electronics, high-tech chemistry, textiles and chemical fibre.

The zone is located on the banks of the Qiantang River and is 20km from Hangzhou.

Bosch’s Hangzhou plant is a three-storey building, with the third constructed under the 2011 expansion. It houses an R&D facility in addition to the machine manufacturing space.

Packaging systems and technology manufactured at the complex

"Bosch Packaging Technology (Hangzhou) was founded in 2001 with 14 employees."

The Hangzhou facility manufactures the complete production line for the pharmaceutical industry.

Its product line includes pure steam generators, water stills and autoclaves, capsule filling and closing machines and filling and sealing machines for vials and infusion bottles, along with presterilised syringes.

The GKF series capsule filling and closing machines were the first to be manufactured at the plant.

Pharmaceutical machinery has always been its main area of business, with nearly 50% of the sales coming from this industry. Food and confectionary industries are the other two core areas.

In November 2011, Bosch Packaging Technology announced that it had plans to expand its packaging machinery manufacturing operations in China.

Bosch Packaging Technology, a subsidiary of German multinational engineering and electronics company Robert Bosch, is one of the largest makers of packaging machinery and confectionery equipment in the world.