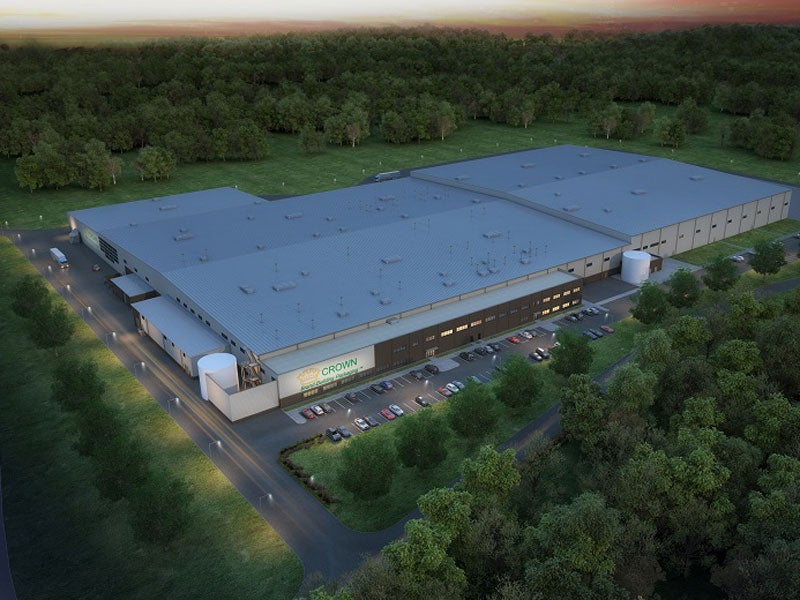 Crown Holdings opened a new beverage can plant in Nichols in Tioga County, New York, US, in May 2017. The new plant is the industry’s first greenfield facility in the country in more than two decades.

Crown already operates 15 can manufacturing facilities in North America, producing aluminium cans ranging in sizes between 7.5oz and 16oz, as well as beverage can ends.

Built with a $150m investment, the new beverage can plant enables Crown to meet the growing demands of beverage companies for speciality cans of different sizes.

The manufacturing plant generated approximately 550 jobs during construction and is currently employing more than 160 people.

Location of the new can manufacturing plant

Located in the southern part of the Tioga County, Crown’s new plant site in Nichols was chosen for its economic and logistical advantages.

The new plant occupies a 533,853ft² area on a 40.66-acre site. It includes 375,000ft² of manufacturing area and 150,000ft² of warehouse space for holding finished products, and office space. Equipped with two manufacturing lines, the plant has the capacity to produce 7,000 cans a minute.

Construction works on the plant began in December 2015, with first line commencing operations in January 2017. The second production line was completed in April 2017.

The massive size of the plant required the use of helicopters to deliver mechanical components for its heating, ventilation, and air-conditioning units. A helicopter was used by the contractor for transporting a total of 44 lifts, which included 11 2,650lb heaters.

The new plant produces two-piece speciality aluminium cans of varying sizes. Speciality cans, which have a diameter other than that of the standard 12oz beverage cans, are becoming increasingly popular with beverage customers in their effort to differentiate their products and attract consumers.

“Located in the southern part of the Tioga County, Crown’s new plant site in Nichols was chosen for its economic and logistical advantages.”

The cans are used for alcoholic and non-alcoholic beverages, including soft drinks, ready-to-drink beverages, juices, beer, wine and spirits, as well as other functional drinks.

The new plant further strengthens Crown’s position in the speciality can market and rebalance its 12oz can portfolio.

The project received a number of incentives from the government due to its location in the Southern Tier region. The government is focusing on reviving the regional manufacturing sector, which has been witnessing a decline for the past few years.

The incentives offered by the government were a key factor in finalising the location of the plant. The New York government’s economic development wing, Empire State Development, provided $8.1m in tax credits under the Excelsior Jobs programme.

The government also provided a grant of up to $6.9m for the project, which also received support from the Tioga County Industrial Development Agency through its PILOT programme.

The New York State Electric & Gas Corporation (NYSEG) also helped in the utility installations at the plant site, as well as provided an energy infrastructure grant.

Blue Rock Construction was responsible for the construction of the plant. Greenman-Peterson provided mechanical, electrical and plumbing, and fire protection design services for the warehouse of the plant.

Lanico
Since forming in 1919, Lanico has become one of the...