One billion cans per year

Expand
Artist’s rendition of Crown Brazil’s new facility in Teresina.
The facility will manufacture all seven varieties of aluminium cans available from Crown in Brazil.
The aluminium cans, being non-toxic and resistant material, are widely used for food packaging. 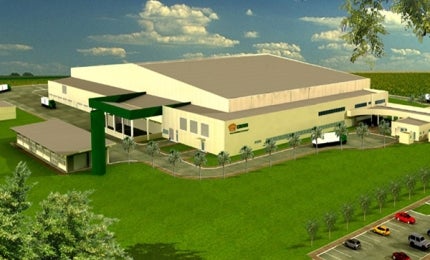 Brazil’s biggest aluminium can manufacturer CROWN Embalagens Metálicas da Amazônia (Crown Brazil) opened a fifth production plant at Teresina, the state capital of Piauí, in May 2014. The company had announced its decision to construct the fourth line in September 2013.

The Teresina plant exclusively manufactures aluminium cans for beverages such as soft drinks, beer, juice, tea, energy drinks and others. The plant will have an initial production capacity of one billion cans annually, which will be doubled to two billion cans a year in the future.

Details of the Crown Brazil plant

"It became operational in April 2014 before being officially opened the following month."

This facility will manufacture the seven sizes of beverage cans presently available from Crown in Brazil. It includes 269ml, 310ml, 355ml and 425ml sleek style cans, as well as 355ml, 473ml and 550ml standard cans.

The new beverage can manufacturing facility principally uses recyclable products for its production thereby reducing usage of raw material by 5% to 7%. It became operational in April 2014 before being officially opened the following month.

Location benefits of the Teresina facility

Brazil is the world’s third biggest Bauxite holding country, the sixth biggest producer of raw aluminium and the ninth biggest consumer of aluminium.

Processing at the can manufacturing plant

Aluminium cans are quintessential for food packaging as they are non-toxic and resistant, lighter than glass and do not rust changing the taste of the drinks.

Rexam opened a fourth production line at its existing plant in Ludesch, Voralberg, Austria, in December 2013.

A press cuts the aluminium sheets into discs, which are then turned into cups with varied diameter and height. These cups then pass through another press where the external walls are stretched under great pressure to give it the can shape.

The next step involves washing the cans thoroughly inside and outside several times and then drying them in an oven. The clean cans are internally coated to prevent the liquid filled from coming in direct contact with the metal.

Finally, the profile of the wide mouth is moulded to the end so that the cans can be fitted and seamed after filling. The last step involves a quality check completed by qualified technicians using electronic means, including high-intensity lights and cameras.

The beverage cans have a 360° printable surface area, which is printed with the use of Crown’s Pictoris™ high-definition printing. The printing technology improves dot spacing for fine detailed images and text.

These cans appeal to both brand owners and consumers, as they are light in weight and quick to cool, according to Crown. The aluminium cans are 100% and infinitely recyclable.

Marketing commentary for the joint-venture

Crown Brazil, which is a joint-venture company between Crown Holdings and Évora, is one of the biggest manufacturers of two-piece aluminium cans for beer, soft drinks, juices and teas in Brazil since its start of operations in 1996.

The company has five plants, including the new beverage can plant in the city of Teresina. Other aluminium beverage can manufacturing plants owned by the company include the Cabreúva plant in São Paulo, Estância plant in Sergipe and Ponta Grossa in Paraná. The Manaus facility in Amazonas produces aluminium ends of the beverage cans manufactured in Cabreúva-SP and Estância-SE.