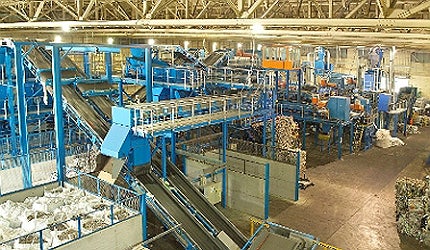 Eco Plastics (formerly known as AWS Eco Plastics) unveiled a new plastic bottle recycling facility in November 2010. The new facility is a rebuild of the plant’s sorting and storage area, which was completely destroyed in 2008 due to a fire accident. It took 14 months to reconstruct the plant.

The new facility is capable of processing 75,000t of polyethylene terephthalate (PET) a year, up from 35,000t, which makes it the most sophisticated and the largest bottle recycling facility in Europe. Eco Plastics intends to increase the capacity to 140,000t/year.

Built at an estimated cost of £17m, the plant produces 11 different types of plastics, ensuring zero-waste production. Considering the demand for low carbon packaging and estimated 30,000t a year of recycled plastic in UK, the new facility is capable of meeting 50% of the national demand.

The Hemswell facility produces 68% less carbon intensive products from the recycled plastic than products made from virgin materials. The carbon cost of producing food grade rPET 78 pellet in 2010 was 254kg/t, while the cost of producing virgin PET was 681kg/t. The cost of food grade rPET pellet is expected to decrease further to 213kg/t in 2011 once the plant reaches its full capacity.

Eco Plastics employs more than 130 people, of which 110 work at the processing site itself.

In March 2011, Coca-Cola Enterprises formed a joint venture with Eco Plastics to expand the Hemswell facility. The expansion included the addition of a new purpose-built facility at the site to supply rPET to Coca-Cola. As part of the deal, Coca-Cola invested £5m in the new plant.

“In March 2011, Coca-Cola Enterprises formed a joint venture with Eco Plastics to expand the Hemswell facility.”

In July 2011, Eco Plastics secured £24m in financing for the expansion of the facility. The funding includes £5m equity investment by Ludgate Environmental Fund Limited (LEFL), £5m by Coca Cola and £14m in bank debt.

In September 2011, Coca-Cola and Eco Plastics announced that their joint venture will be known as Continuum Recycling.

All the rPET produced by the new facility is sold to Coca-Cola as part of a ten-year agreement. The expansion is part of Coca-Cola’s plans to include 25% rPET in its plastic packaging sold in the UK.

The new facility has created 30 new jobs. It is expected to double the UK’s plastic reprocessing capacity to 75,000t.

The re-opened facility houses 17 polymer and optical sorters developed by Stadler, TITECH and Herbold. In addition it houses a hot wash and an extrusion line manufactured by Sorema, which was added as part of the £14m capital investment programme initiated in June 2009.

The programme also involved installation of a closed loop water processing system that can recycle up to 15m³/hr of water to be reused in the process. Eco Plastics claims it is the first such facility in Europe’s plastic bottle processing industry.

“In September 2011, Coca-Cola and Eco Plastics announced that their joint venture will be known as Continuum Recycling.”

Plastic bales received from the suppliers are put in a bale breaker to separate them into individual items. These are sorted into PET and HDPE while the other plastic is sent down to the second line for further sorting.

The sorted dry PET is granulated and washed again to produce super clean flakes. All the contaminations, such as caps, labels, glues and dirt, are removed by the hot wash process which is sorted automatically to remove unwanted colour PET.

The dry flakes are then put into extruder and cooked for about 1.5 hours at 120°C to remove any further impurities and produce food-grade and HDPE pellets. The plant had converted more than 70% of the input material into food grade plastic in 2009.

Leftover plastic is sorted into a single polymer stream using the optical sorter and then granulated and sold to re-processors.

The original building was in the shape of an aircraft hangar, with many corners and improper flow points. To overcome this problem, the new sorting facility was first designed and built internally and later external walls were raised around the plant. The effective design module has resulted in an efficient process flow.

Part of the building plan was developed by TITECH and major construction work was handled by Stadler.

The TITECH autosort is a multifunctional machine that sorts and recovers material from different waste streams such as polymer, paper, wood cleaning and PET sorting.

TITECH autosort is highly flexible and provides statistical data of the input material. Its features range from built-in maintenance and control of valve units to monitoring and controlling the machine from a remote location.

The DUOLINE scanning technology enables double scanning of the input material. The fast and reliable near infrared (NIR) sensors sort the material with high optical resolution. This technology increases the distance between the scanner and the conveyor belt, and results in less damage and increased reliability of the optical components.

The NIR sensors combined with visual spectrometry sensor sort the material by type and colour as well.

In late 2007 Nampak Plastics Europe based in Milton Keynes, UK, (a worldwide packaging concern) announced that it would open its own plastic milk bottle recycling facility.

In February 2011, Nampak Plastics inaugurated its new bottle-in-plant facility built with an investment of £3.2m.