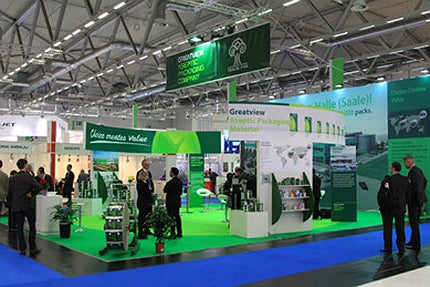 Greatview, one of the largest roll-fed aseptic packaging suppliers in the world, opened its first overseas factory in Halle (Saale) in Sachsen-Anhalt, Germany, in June 2013.

The new facility provides aseptic packaging for non-carbonated soft drinks and dairy products of the Chinese company’s customers in Europe.

The plant is also undergoing expansion to export the additional capacity to the Middle East as well as North and South American markets.

"Greatview, one of the largest roll-fed aseptic packaging suppliers in the world, opened its first overseas factory in Halle (Saale)."

The new European facility of Greatview is located in the Halle-Saalekreis industrial park at the Orion Strasse 8 next to the A14 motorway.

The production site offers good rail connectivity and is situated close to the Leipzig airport in Germany.

The strategic location of the plant in the centre of continental Europe ensures excellent logistics solutions for the supply of products to dairy and beverage firms throughout the region.

The packaging products of the plant can be supplied to customers from Russia, the Middle East, North Africa, as well as North and South America through ports in Germany, Belgium and the Netherlands.

The construction of Greatview’s Halle aseptic packaging plant started in May 2011. The €50m ($65m) worth phase one of the plant was officially inaugurated in mid-2013. It is currently operated by 110 employees. The current annual production capacity of the plant is four billion aseptic cartons for dairy and beverages packaging in Europe.

An investment of €33m ($43m) has also been announced to expand the facility in the second phase of the project. The expansion will increase the plant’s production capacity to eight billion aseptic cartons a year.

The capacity addition is aimed to enable exports to the Middle East as well as North and South America. Halle factory will be the primary exporting facility of Greatview when the expansion is completed.

The expansion will create 30 more jobs.

Greatview produces aseptic boxes for drinks, juices, creams and concentrates in sizes ranging from 100ml to 200ml. The boxes are marketed under the brand name of GA Brick Aseptic, and are available in both slim and base shapes.

"The production site offers good rail connectivity and is situated close to the Leipzig airport in Germany."

The raw materials used for manufacturing aseptic packaging material include liquid packaging board (LPD), polyethylene and aluminium foil that are procured from select Europe and US suppliers.

The rigid LPB made of certified fibre for aseptic packaging gives a firm look to each package and ensures flexibility as well as resistance during the forming and filling process. The fibre board is treated to ensure maximum protection for perishable foods. Each aseptic cartoon contains an ultra-thin layer of aluminium foil that forms a barrier against light and oxygen.

Flexo and flexo-process technology is used for printing the packaging material. Precision in the printing process is achieved with the use of stroboscope lighting, digital imagery and high speed cameras.

Printing is done using water based inks alone. The ink mixing and plate making are done in-house, at the plant.

Uninterrupted laser scanning is performed during the form-fill-seal process at the plant to detect and eliminate any production defects.