Expand
Merck's new Hangzhou plant is one of the largest drug packaging facilities in China.
The new Hangzhou facility was inaugurated in April 2013.
The facility has 16 high-speed lines for tablets and sterile product packaging. 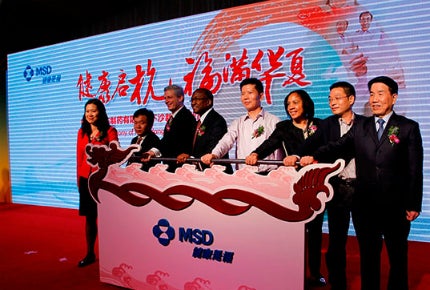 The new Hangzhou facility packages medicines for China as well as the Asia Pacific region. The plant is believed to have created 350 new jobs.

Merck, also known as MSD outside America, has 72 drug manufacturing facilities and approximately 83,000 employees worldwide with its drugs and vaccines supplied to more than 140 countries.

"The new Hangzhou facility packages medicines for China as well as the Asia Pacific region."

Merck’s new facility in China is located in the Hangzhou Economic and Technology Area (HEDA). The facility is built over an area of 75,000m².

The plant’s construction started in July 2010 and took more than two years to complete. The plant was officially inaugurated in April 2013.

The facility is equipped with 16 high-speed lines for packaging both tablets and sterile products. It has the annual capacity for producing more than 300 million packages.

The facility packages drugs especially meant for diabetes and cardiovascular diseases, as well as for infectious, respiratory and bone diseases. The plant will also package products for clinical studies and medicinal products to be launched in future.

Merck entered China in 1992. It opened its first production facility in Hangzhou in 1994 with the partnership of Hangzhou East China Pharmaceutical Group. Merck later opened its second facility in China in Shanghai. The company, including its new Hangzhou facility, currently has three factories in China.

"Merck’s new facility in China is located in the Hangzhou Economic and Technology Area (HEDA)."

It has offices in ten Chinese cities with its marketing and sales headquarters in Shanghai. The company has more than 5,000 employees in China.

Merck has introduced more than 40 innovative medicines and vaccines in China during the last two decades. The company continues to invest more towards research and innovation in the country. In 2011, it announced an investment of $1.5bn in R&D in China over five years. That same year it established its Asia R&D headquarters in Beijing.

The new Hangzhou facility is the company’s 72nd manufacturing facility for drugs and vaccines.

Merck’s strategy during last few years has been to reduce manufacturing operations worldwide where it faces cost challenges and to expand in emerging Asian markets, especially in China where it can leverage from increasing domestic demand coupled with low cost production potential.

The company has closed 16 facilities, including eight manufacturing plants, since 2009, the year it acquired Schering-Plough, a US-based healthcare major, for $41.1bn.

Schering-Plough had an expanded presence in China with its significant market presence in the areas of allergy, skin care, respiratory, cardiovascular, oncology, infectious diseases and women’s health.

Merck is also consolidating its manufacturing and commercial presence in other Asian markets. It opened a $21m packaging plant in Indonesia in October 2012. In 2011, it had committed to invest more than $250m to expand its Tuas plant in Singapore during the next ten years.

Promens, an Iceland-based plastics manufacturer for the packaging industry, will open a production facility at Taicang in Jiangsu Province of China by end of 2013.

A new crepe paper production facility in Longkou in Shandong province of north-eastern China was unveiled in November 2012.