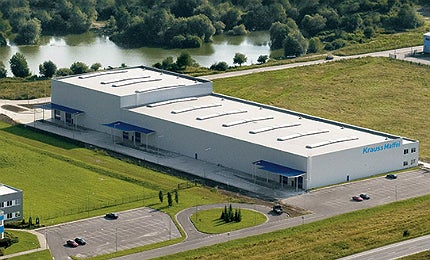 KraussMaffei Group, a manufacturer of injection moulding equipment based in Germany, opened its new production plant in Sucany (near Martin) in Slovakia during October 2010. KraussMaffei had been present in Martin since 2005. Construction of the new plant in Sucany enhanced the company’s production portfolio and also helped in streamlining its internal processes.

By investing in the plant, KraussMaffei was also able to strengthen its business in Eastern Europe, where demand is growing steadily. The plant enabled the company to improve the working conditions for its employees too.

In December 2011, KraussMaffei announced its plans to expand the Sucany plant. The expansion was completed in November 2012. It nearly doubled the surface area of the plant’s production space, from 6,600 square metres (71,041 square feet) to 13,000 square metres (139,930 square feet), by adding a second assembly hall.

"KraussMaffei was able to strengthen its business in Eastern Europe, where demand is growing steadily."

KraussMaffei has made number of improvements to the Sucany facility as part of the expansion project. These improvements were mainly in the areas of production processes and quality management. The development and design process of the electric injection moulding machines was also improved.

Expansion will double the production capacity of the plant. It was originally scheduled for completion in the first quarter of 2013 but was completed well ahead of schedule.

The expansion created approximately 80 new jobs at the plant, increasing the total number of employees at the facility to around 200.

"Apart from the Sucany plant, KraussMaffei also announced the expansion of its Haiyan plant in China."

Fast cycle times, high precision and cleanliness can be achieved through use of the EX series machines. The MX series uses innovative injection moulding technology.

AX series injection moulding machines assembled at the Sucany plant are highly energy efficient, precise and can be used for carrying out stable processes. They occupy less space and have reduced maintenance costs.

The machines are available in clamp forces ranging from 50t to 350t, making them suitable for a wide range of uses. The Sucany plant assembles AX series machines up to 350t.

Marketing commentary for the German company

KraussMaffei operates through 140 subsidiaries located across the world. It offers a range of products based on injection and reaction moulding technology.

Expansion of the Sucany plant was undertaken just one year after the opening of the plant, indicating the strong growth rate in the region.

The expansion plans are part of KraussMaffei’s strategy to focus on emerging markets as well as on Eastern Europe where demand for its products is growing.

Crown Holdings, along with its subsidiary Crown Asia Pacific Holdings, opened a new facility at Kechnec in eastern Slovakia in 2010.