Injection moulding unit and a lab 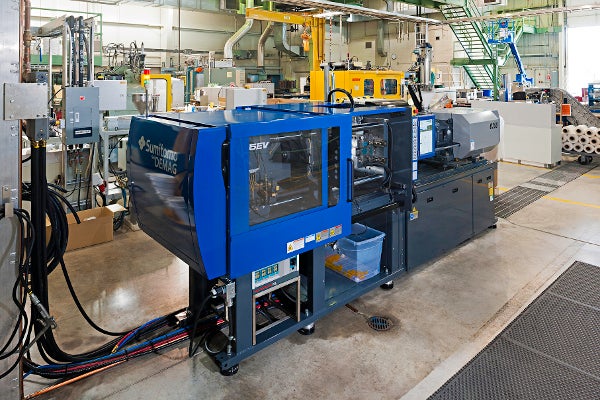 NOVA Chemicals commissioned a new injection moulding unit and an advanced laboratory at its polyethylene research and development (R&D) facility, known as the Centre for Performance Applications, in the city of Calgary, Alberta, Canada, in September.

The new injection moulding unit and the lab were commissioned as part of the major expansion project that broke ground at the Centre for Performance Applications in August, in order to transform the R&D facility into a hub for collaborating with customers on the development of higher-value products and applications for the company’s polyethylene resins business.

Besides the injection moulding unit, NOVA Chemicals has also invested in a range of caps, closure equipment, and lab upgrades, as part of the centre’s efforts to increase customer satisfaction through collaborative product and application development.

Details of the new injection moulding unit in Alberta, Canada

Caps made from the new moulder undergo quality checks using a suite of modern equipment and technologies in the newly renovated onsite lab, which helps both the company and its customers to analyse the performance of polyethylene closures in actuality.

NOVA Chemicals’ polyethylene (PE) resins business launched expansion works for its Centre for Performance Applications in August and is expected to be completed by spring 2015.

"NOVA Chemicals’ polyethylene (PE) resins business launched expansion works for its Centre for Performance Applications in August and is expected to be completed by spring 2015."

The centre, which was previously named the NOVA Chemicals Technical Centre (NCTC), will, on completion of the expansion works, collaborate with customers to develop high-value products and applications.

The company also installed a suite of new equipment and component upgrades to support the existing rotational moulding equipment at the centre in October. The upgrades included advanced software to align Ferry Industries’ rotational moulding equipment, to meet industry standards based on data quality, reliability, process control and efficiency. In addition, a new insulated drop box and jerrycan mould will be fitted at the facility to make multi-layer parts.

Nova Chemicals’ investments in rotational moulding equipment and upgrades are targeted at enabling the company and its customers to bring better-designed and better-performing products to market quicker.

The Centre for Performance Applications, upon its expansion, will focus on product development process with resin testing, development of applications and collaboration with customers.

The polyethylene R&D centre will work in collaboration with NOVA Chemicals’ Centre for Applied Research, formerly named Research & Technology Centre (NRTC), also located in Calgary, to build up the company’s product-quality by developing a customer-centric approach to product development and innovation.

Headquartered in Calgary, Alberta, Canada, NOVA Chemicals is a wholly-owned subsidiary of UAE-based International Petroleum Investment Company (IPIC). It develops and manufactures chemicals, plastic resins, ethylene, and a variety of energy co-products. The company’s revenue and net profit for 2013 were $5.27bn and $658m respectively.