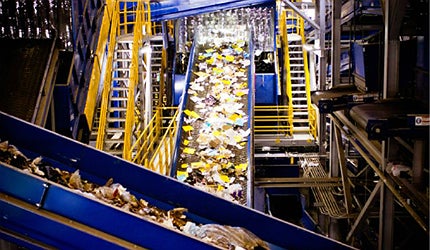 Republic Services officially opened its new materials recovery facility in August 2012. It is located in the 342-acre Newby Island Resource Recovery Park (NIRRP), which is in San Jose, California, US.

The facility has an hourly capacity of 110t and an annual capacity of 420,000t. It is claimed to be the world’s largest multistream recycling facility.It is spread over five floors and was built with an investment of $55m.

The plant is capable of handling the waste generated by the region until 2027. It will process waste produced by nearly 8,000 businesses in the city of San Jose. It will also process recyclables including organics from 85,000 homes in the region.

"Aluminium and plastic recovered by the plant will be sold to reprocessors within the US."

Republic Services operated an 80,000 square feet recycling plant at the NIRRP until January 2012. The production was ceased in January in order to carry out a complete retrofit at the plant.

All the existing equipment at the facility was removed and transported to other recycling facilities operated by Republic.

Bulk Handling Systems was contracted to design, manufacture and install the highly automated system at the renovated plant. By 2015, solar and wind utilities will be installed at the plant to reduce its environmental impact.

The other two process commercial dry and wet recyclables. A glass clean up unit and a shared container line are also part of the facility. The container line is equipped with seven optical sorting units.

The equipment is designed to maximise the recovery of recyclables. A recovery rate of 75% is expected on the commercial lines and 95% on the residential single-stream line. The conveyor belt system at the facility runs for about 1.5 miles (2.4km).

Recovery process at the Californian plant

"The facility will help in diverting nearly 80% of the material collected in the city from going into landfill."

The entire waste stream is to be broken down to ensure optimum recovery. The process technology of the facility was designed based on these criteria.

Workers first hand pick the plastic and cardboard material from the waste passing over a conveyor belt. Screening, optical and air separation equipment is then used to separate the different materials. The plant uses state-of-the-art computer and aerospace technology to process wet, dry, organics and recyclables.

Organic material recovered from the recyclables is sent for further waste-to-energy processing. The process generates methane gas, which is converted into clean fuel using gas-to-energy conversion equipment. The fuel is supplied to residential and business customers.

Contractors involved with the renovation

Benefits of the material recovery facility

"The city of San Jose awarded a 15-year waste management contract to Republic Services as part of its Green Vision initiative."

The city of San Jose awarded a 15-year waste management contract to Republic Services as part of its Green Vision initiative. The initiative, which was announced in 2007, focuses on addressing the waste generated by the city and reducing the volume of landfill by 2022.

Republic built the new plant in order to fulfil the requirements of this contract. The facility will help in diverting nearly 80% of the material collected in the city from going into landfill.

Earlier, commercial waste was being collected by 20 different haulers, out of whom just four to six provided standard recycling services. Republic initiated a recycling programme to collect waste from the region as part of the 15-year contract.

The company will operate 70 natural gas powered trucks to provide waste collection services to San Jose, as well as Milpitas and Santa Clara.

CarbonLITE, a subsidiary of HPC Industries, is a US-based producer of bottle grade raw materials.

In May 2010, Mountain Valley Recycling (MVR), a high sustainable plastic resins manufacturer, unveiled plans to set up a plastic recycling plant in Frankfort, Kentucky, US.

Placon Corporation completed the construction of its plastics recycling facility in Fitchburg, Wisconsin, US, in May 2011.

Rumpke Recycling has been operating its 68,000ft² Columbus, Ohio, material recovery facility since 1992.