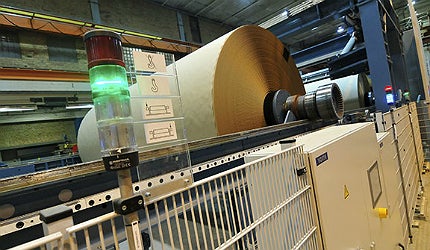 Svenska Cellulosa Aktiebolaget (or SCA) is carrying out a series of expansions at its Munksund paper mill located in Piteå, Sweden. The paper mill was originally built in the 1860s and currently produces 365,000t of kraftliner annually.

Expansion plans include upgrading the paper machine and soda-recovery boiler. A new bio-fuelled lime kiln will also be added to the mill. SCA is investing a total of SEK1.3m in the expansion.

Upgrade of the paper machine and soda-recovery boiler is expected to be completed by 2013.

Kraftliner produced at the facility

“The paper mill was originally built in the 1860s and currently produces 365,000t of kraftliner annually.”

These products are used in the manufacturing of industrial packaging, printing applications and corrugated packaging. They are produced using sustainably sourced raw materials including softwood and hardwood, recycled fibre and sawmill chips.

White Top Kraftliner forms a third of the mill’s production and is showing strong market growth. It has a white surface and provides good printing qualities essential for fast moving consumer goods.

The Munksund mill is equipped with a linerboard paper machine (PM 1) with a grammage range of 125-440g/m2. The paper machine was rebuilt in 1996 and operates at a maximum speed of 750m/min.

“These products are used in the manufacturing of industrial packaging, printing applications and corrugated packaging.”

A StreamLine Onesider wrapping line for-White-Top Kraftliner is also part of the mill. Supplied by Metso, the wrapping line requires 30% less space compared to other wrapping lines. It has a unique one-sided design enabling all the equipment and consumables to be arranged on one side. The design provides the flexibility to the operator and to place the line near the winder or a wall.

In 2008, a new pressure disc white (PDW) liquor filter was installed by Metso at the mill. The PDW filter replaced a white liquor sedimentation vessel built in 1966. It enabled the mill to produce more of and a higher quality of white liquor.

A new winder was added to the paper machine in 2011 at a cost of SEK255m. The winder is fully automatic and requires less maintenance. It helped in increasing the efficiency of the paper machine and improved the reel quality.

“In 2008, a new pressure disc white (PDW) liquor filter was installed by Metso at the mill.”

Metso is responsible for upgrading the paper machine. It will supply a flow system, headbox, press and dryer sections, as well as a ventilation system.

The majority of the SEK540m investment of about SEK400m will be made into the paper machine. The remaining amount will be spent on replacing the pressure valve of the soda recovery boiler. The upgrade will increase heat recovery and improve output rates.

The existing lime kiln was originally built in 1966 and is a component of the chemical recovery unit of the mill. It is powered by fossil fuels and became a major bottleneck for future development of the mill. SCA has already tested the technology used in the lime kiln at its Östrand pulp mill in Timrå.

The SEK490m investment into the new lime kiln will also include an electro-precipitator, related equipment and additional equipment to handle wood pellets. The lime kiln will enable the mill to increase production and produce higher quality products.

The Munksund mill is equipped with a wastewater treatment plant installed in 2009. The plant was installed as part of a sustainability initiative. It uses a technology called the Multibio process to reduce the amount of organic matter in the wastewater by 30%. The new lime kiln will add to SCA’s sustainability initiatives. It will use wood pellets and reduce the mill’s carbon emissions by nearly 75%.

UPM is a large paper mill in Jämsänkoski, central Finland, which has an annual production capacity of 870,000t and employs 750 people (23,000 worldwide).

Amcor Packaging (Amcor) is constructing a new paper mill at their botany site located 11km away from the Central Business District of Sydney in New South Wales.

Mondi Group is a €5.7bn ($7.2bn) paper and packaging company with headquarters in London, UK, and Vienna, Austria.