Expand
Greenstar Recycling's Akron facility can process 7,000t of recyclables per month.
The Akron materials recycling facility occupies an area of 196,000 square feet.
Machinex supplied the plant with majority of the equipment. 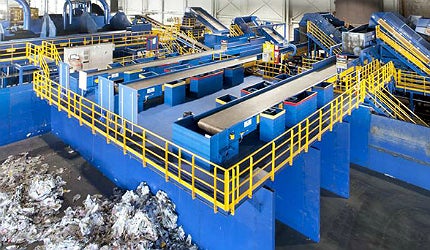 Greenstar Recycling’s curbside materials recycling facility in Akron, Ohio, US, was opened in June 2012. The facility can process 7,000t of recyclables per month recovered from the curbside. It serves the needs of customers in central and north-east Ohio. Capacity of the facility is expandable up to 15,000t.

Greenstar invested $7m in the facility. It received a grant of $209,000 from the state to construct the facility.

A total of 43 new jobs were created by the plant, which is expected to increase to 75 in the future as recycling volume increases.

"The facility will recycle about 800t to 1,000t of recyclables collected in the city each month."

The Akron facility was built by Greenstar after being awarded a ten-year contract for processing recyclables from the city of Akron in January 2011. The company’s proposal was chosen out of five submissions.

The facility will recycle about 800t to 1,000t of recyclables collected in the city each month. Greenstar plans to collect recyclables from north-east Ohio and central Ohio in the future to expand its recycling.

The facility will help in boosting the recycling rates and sustainability in the region. It supports the city’s Greenprint for Sustainability initiative, which launched in 2007.

Recyclables from the city were earlier transported to solid waste management facility in Cuyahoga County for processing.

An existing 196,000ft² hangar located at the Akron Fulton International Airport was renovated and new technology and equipment was added to create the recycling facility in Akron. The facility was earlier owned by Goodyear Aerospace and used for manufacturing fighter planes during World War II.

The majority of the equipment installed at the facility was supplied by Machinex. The plant is equipped with a back scraping drum, a mach old corrugated cardboard (OCC) screen, a scalping screen, a glass breaker screen and two optical sorters.

A glass clean up system, one mach one news screen, 2D fraction separator, one mach one finishing screen 2D and two balers capable of accommodating all materials are also part of the facility. A Machinex pre-press and high-capacity extrusion baler are also installed. Plastic perforators increase the baling compaction capacity.

The new facility of Greenstar uses single stream recycling which enables all recyclables to be combined into one bin. This reduces the need to pre-sort recyclables and increases the convenience for residents and businesses. It also reduces collection costs and increases residential recycling.

"Greenstar invested $7m in the facility. It received a grant of $209,000 from the state to construct the facility."

The mach OCC screen removes cardboard at pre-sort. The finishing 2D screen separates fibre, containers and fines. The scalping screen and glass breaker screen break glass early in the system. The optical sorters eject PET and aseptic cartons at the end of the process.

The 2D fraction separator is installed on the container line and is used to separate small pieces of paper remaining in the container stream. The processing system can handle 23t to 25t of material each hour. It recycles nearly all of the recyclables materials which are baled and shipped for further processing.

Greenstar has partnered with Vadxx Energy to install processing technology at the plant that will convert household plastic into synthetic crude oil. The technology will process No. 3 through No. 7 plastics commonly used in food containers. Greenstar is currently working on obtaining the necessary permits and financing for the technology.

The synthetic crude oil produced using the technology is claimed to contain lower levels of sulphur compared to naturally occurring oil. It is also light, with an API of 350-450. The oil produced is expected to be sold to oil companies based in Texas, US.

The first process unit for converting plastics to oil is currently being implemented at the plant by Rockwell Automation. The gas produced during the process will be used to produce electricity to power the unit.

W&S Recycling, a company based in the UK, announced in December 2012 that it would build a new materials recycling facility (MRF) in Poole, Dorset, UK.