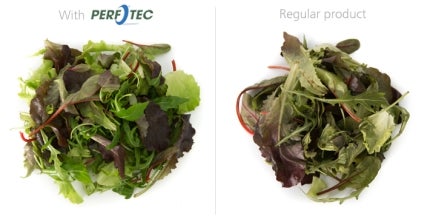 In-market results have proven that in-store waste can be reduced by 50% when the shelf life of fresh produce is increased with PerfoTec’s respiration control system. Not only does the product quality improve, actual sales volume also increases. These results are not possible with pre-perforated films but can only be achieved by combining PerfoTec’s Online Laser Perforation System with the Fast Respiration Meter.

But there is another important benefit, which may not be directly visible. It makes the distribution and ordering process between suppliers and retailers a lot more simple, flexible and sustainable. Film suppliers can also benefit from PerfoTec’s solution. It helps them to establish a long-term relationship with their customers and to better respond to their needs.

The most obvious benefits of PerfoTec are the visual benefits, in terms of reducing the negative effects of mould, discolouration and dehydration. However, it also has positive effects that are less noticeable in-store, such as preventing the smell and softening of the product.

Fruit and vegetables need oxygen to stay fresh but the respiration rate varies through the seasons, making it difficult to design the optimal packaging properties.

The Fast Respiration Meter from PerfoTec quickly measures the respiration rate of fresh fruits and vegetables. The supplied AMAP software calculates the required film permeability. The PerfoTec Online Laser Perforation System then uses this information to adapt the film permeability through micro perforations, which helps to considerably extend the shelf life.

PerfoTec’s respiration control can be used for all fresh, fresh-cut and whole produce.

The innovative and patented PerfoTec Fast Respiration Meter is developed and designed to measure the respiration rate of fresh produce within just four hours. This enables you to effectively respond to seasonal variations. It measures oxygen consumption and carbon dioxide production, as well as calculating the respiration rate.

The results from the respiration meter can easily be uploaded onto the website. In combination with the packaging and film specifications, the data is converted into the number and size of laser micro perforations required to extend the shelf life.

The patented laser perforation system adapts the film permeability with micro perforations during packing. It is specially developed for integration with vertical or horizontal packaging machines, as well as film converting machines. The robust PerfoTec laser makes consistent round holes, which is essential for AMAP technology.

The PerfoTec laser system has an integrated camera to inspect each hole for quality-control purposes, and to check and control the oxygen transmission rate (OTR) of each pack. If necessary, the laser is automatically adjusted ‘on the fly’ to balance out any variation in film thickness.

PerfoTec has made it easy to implement its respiration control technology. The installation of the PerfoTec laser system, Fast Respiration Meter and software only takes two days, including training.

Is your company ready to take action on shelf life extension and food waste? Please use the form below to send us your business enquiry.